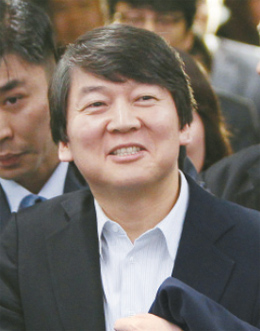 Ahn Cheol-soo, the highly popular liberal rising star, shot down speculation that he would create a new political party and run in the next year’s legislative election yesterday.

Ahn, dean of the Seoul National University’s Graduate School of Convergence Science and Technology, faced journalists at a brief press conference at his company, Ahn Lab, in Pangyo, Gyeonggi. He was announcing his company’s creation of a team devoted to contributions to society, but reporters were most interested in his political plans.

“There is much speculation about me, including a launch of a new political party to run in Gangnam [in the legislative elections],” Ahn said. “But I want to make it clear that I have no intention to do so, and there is no such possibility.”

Ahn spoke about his recent announcement that he would donate a portion of his assets to society.

“I am thinking about creating a foundation, but there are many things to think about,” he said. “There are various models, but I want it to be more than just a scholarship foundation that gives out money. It should be something that fits the 21st century and that will promote participation by the public. It will be something larger than a micro-financing project.”

“I will act upon my words,” Ahn said. “This is not a suitable opportunity to talk about politics, but I have said repeatedly that I have no energy to spare for things other than the school and the plan to establish the foundation.”

Ahn’s remarks were brief, but he shot down many rumors about his political ambitions in the rare public appearance. About 100 journalists bombarded him with questions, but Ahn refused to discuss more about politics and then left the press conference.

Speculation continued yesterday that he would run in the presidential election in December 2012. In a survey conducted last month by the JoongAng Ilbo, YTN and the East Asia Institute, 50.1 percent of respondents said they supported Ahn for the presidency, 11.7 points ahead of long-time presidential front-runner Park Geun-hye’s 38.4 percent in a head-to-head matchup simulation.

During his brief encounter with the press yesterday, Ahn did not discuss the liberals’ recent decision to merge to form a new political party.

“It is natural that he would not make any move before the April legislative elections,” said a senior Democratic Party figure. “He will make a decision depending on the new political landscape after the elections.”

Meanwhile, Ahn Lab’s stock price went on a rollercoaster ride yesterday. The shares skyrocketed by 13 percent to 130,600 won in the morning before Ahn’s press conference, after media reported that he would announce plans to expand his social contributions. The stock price plummeted after Ahn said he wouldn’t be creating a new political party or run for the legislature. It dropped to 98,100 won and did not rebound.