Special prosecutor appointed to probe one of their own

Special prosecutor appointed to probe one of their own 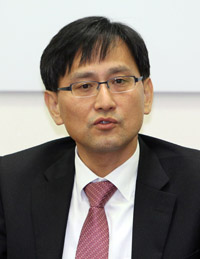 Faced with criticism that the prosecution had been slow to address allegations of internal corruption, Prosecutor General Han Sang-dae has appointed a special prosecutor to investigate whether a prosecutor was bribed by her lover in return for helping him win a lawsuit.

The 36-year-old prosecutor at the center of the controversy, surnamed Lee, had apparently been in an affair with a judge-turned-lawyer surnamed Choe, 49, since 2007, according to the prosecution. To help Choe win a lawsuit he had filed, Lee allegedly lobbied her colleagues for a favorable outcome and received a corporate credit card, a Mercedes-Benz sedan and a Chanel bag from Choe in return.

Lee Chang-jae, a senior prosecutor from the Suwon Prosecutors’ Office in Gyeonggi, was named the special prosecutor to lead the probe.

The prosecutor who is alleged to have received the bribes was formerly based out of the Busan Prosecutors’ Office, and her affair with the lawyer supposedly continued after she was transferred to another prosecutors’ office. But their relationship ended this past May when the lawyer suddenly sent her a text message that read, “Let’s break up. Bring my Benz back.” She returned the car.

The alleged corruption was revealed two months later in July when a 40-year-old college lecturer reported it to authorities. The prosecution later learned that the college lecturer was also having an affair with the lawyer and had been pushing him to end his relationship with the prosecutor.

The decision to appoint a special prosecutor in the latest case came as media outlets in recent days have questioned why the prosecution had not launched an investigation earlier and whether there had been an effort to cover up the allegations. Some outlets have also reported that the lawyer had also bribed other prosecutors and not only his lover.

“Prosecutor General Han focused on mounting public outcry over corruption of the former prosecutor [Lee],” a Supreme Prosecutors’ Office official told the JoongAng Ilbo on Wednesday. “The investigation [by the special prosecutor] will be carried out into every incident related to the lawyer.”