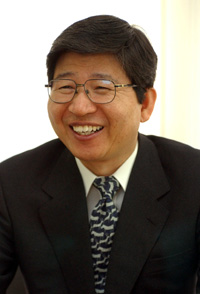 Yonsei University announced yesterday that Jeong Gap-young, 60, an economics professor, has been selected as its 17th president.

This is the first time in 23 years that the Yonsei presidential election process was not through a direct vote. Jeong’s appointment came after the university’s board of directors nominated five candidates on Nov. 14 for the position after a review.

Jeong was ratified as president with 86.6 percent of the vote by professors on Wednesday, succeeding Yonsei’s 16th president, Kim Han-joong.

His term will run for four years starting February 2012.

In a phone interview with the JoongAng Ilbo, Jeong said that he was “happy but feels the weight of responsibility.” He added, “I will focus on launching Yonsei University as a prestigious school worldwide.”

After graduating from Yonsei University with a degree in economics, Jeong received a master’s from the University of Pennsylvania in 1981 and completed his doctorate at Cornell University in 1985. In 1986, Jeong returned to his alma mater and has served as professor at Yonsei’s College of Business and Economics.

He has also been on the board of directors of the Center for Free Enterprise, a think tank, since last year.

Prior to his appointment as president, Jeong served as vice president of Yonsei’s Wonju campus.

“Professor Jeong, having served as the Wonju campus vice president since 2006, has already been acknowledged for his administration skills,” said a university representative.

Jeong has published numerous books and papers including bestselling essays such as “Nine is Greater than Ten.” Known for his ability to write on economics in an accessible manner, he is known to the public as an “economist that communicates.”