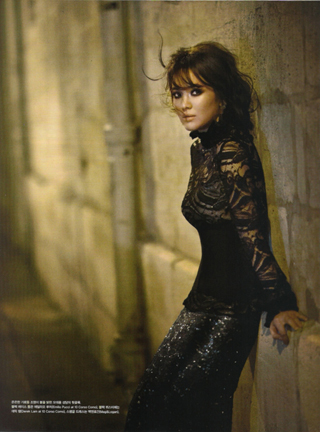 Actress Song Hye-kyo has shocked fans by unveiling a new side of her persona through a fashion spread in the December issue of Korean Vogue.

In the December issue of the high-end fashion magazine the Korean actress, best known for her natural beauty, has transformed herself for a photo shoot in Paris where she wears a range of couture outfits.

In one of the most memorable shots Song leans suggestively against a building wearing a black see-through top and smoky eye makeup that lends a sexy look never before seen on the star. The spread drew comments from netizens, with one posting “Best see-through look to date.”

Song is also in the news for making an appearance in the Chinese movie “The Grandmasters” with famous Chinese actress Zhang Ziyi.