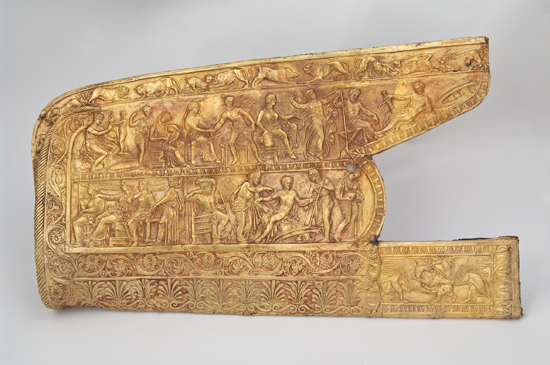 The new exhibition “The Gold Treasures of Ukraine” at the Hangaram Design Museum at the Seoul Arts Center in southern Seoul offers a glimpse of the mystifying origins of Silla’s obsession with gold.

One of the highlights of the exhibition is “Cheonmado,” or “Painting of the Heavenly Horse,” which is the only surviving picture from the Silla Dynasty (57 B.C.-936).

The exhibition will display over 260 artifacts on loan from the Ukrainian Museum of Historical Treasures, as well as 70 photographs and video clips. The museum’s collection has been exhibited in various locations including the Metropolitan Museum of Art in New York and Louvre Museum in Paris, though the artifacts displayed are always different depending on the museum. The exhibition in Korea will be an expanded version of the Ukrainian museum’s collection.

“Through this exhibit, visitors will learn that the history of Ukraine goes back to the time when the Schyths existed,” said Sergii Chaikpvskyi, head of Ukrainian Museum of Historical Treasures, who visited Seoul for the exhibition. “We hope visitors will get a lot out of this experience and learn more about Ukraine.”

The exhibition also features golden crowns and ornaments and other excavated artifacts of the Scythians.

Scythians, also known as Scyths, are horse-riding nomads that lived in a vast area ranging from present-day Central Asia to Ukraine, influencing many cultures, including Korea.

The golden artifacts of the Scythians are praised for their radiance and are often called the “pyramids of the grassland,” in a comparison with the Egyptian pyramids.

Through these artifacts, the exhibition seeks to illuminate the Scyth civilization and trace how it eventually helped form the roots of Korean culture during the Silla Dynasty. 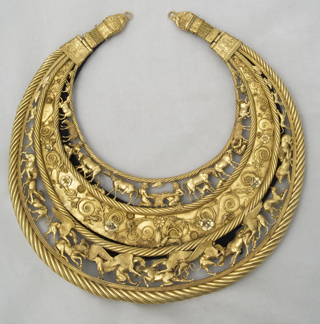 The artifacts on display here, exhibition organizers said, demonstrate hints of communication and trade between the northern regions.

“Though there may not have been direct contact between the Scyths and Koreans, the Scyths’ influence would have entered Korea through China,” Chaikpvskyi said. “Evidence of this influence can be gleaned from similar patterns found in art, clothes and ornaments.”

Stepping into the exhibition hall, the sentence “The East and West were one in the fields of Eurasia,” marked on a plain white wall, sets the tone for the exhibition, which is divided into four sections.

The first section presents the oldest civilizations of the Cimmerians, Scythians and Sarmatians. The Cimmerians lived on the fields before the Scythians and survived by raising horses and going on military expeditions. Archeologists have discovered weapons and harnesses from burial sites that represent this culture.

The Scyths are represented by animal patterns and ornaments, realistically and dynamically rendered. And the necklaces and pectoral decorations they made were not only decorative but held social, religious and financial significance.

With the downfall of the Scyths came the Sarmatians. The art created during this period is more decorative than that of its predecessors, with colorful stones and glass added to the golden artifacts.

In the next section, a description of the Scyths’ relationship with the Silla Dynasty is explained through a series of images.

The Scyths’ worship of gold eventually made its way into Korea, having direct application in the golden crowns and belts created during the Silla period. 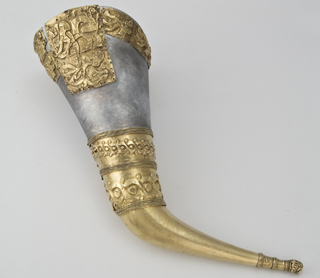 In the third section, the life and culture of nomadic tribes in the Middle Ages is portrayed. This period was well known for the mass movement of nomadic peoples, who also continued to create art. The decorations from this era focus less on animals and more on patterns. Gold ornaments and belts from this time are also displayed here.

The final section of the exhibition is composed of the ornamental art of Ukraine from the 16th to the 20th century. This section has a luxurious feel with a lot of religious artifacts, including communion cups and plates. And even the smallest details are expressed in gold.