Student’s perfect CSAT is all his own

Student’s perfect CSAT is all his own 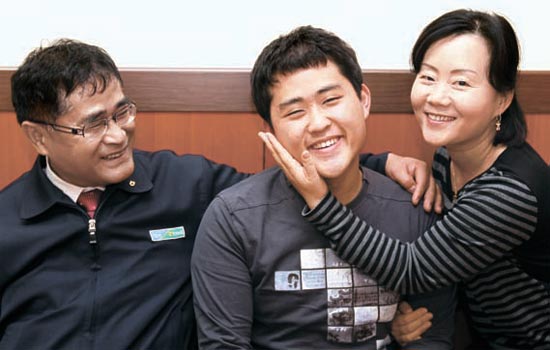 Students studying for the College Scholastic Academic Test often turn to private academies and tutors to give them an edge.

But one student has proven it is possible to ace the CSAT on his own, in a demonstration of the power of public education.

“I didn’t have any special tactics. I just read a lot of books and studied diligently,” said Baek Ju-hong, 18, holding up his CSAT report.

Baek, a senior at Goksung High School in South Jeolla, received full marks on the CSAT, with no answers wrong on the Korean language, mathematics, English and social science/science sections of the test this year. He was one of only 27 test takers aiming to enter university humanities departments who did not get a single question wrong in the three core sections of the CSAT: Korean, math and English. The test scores were announced Wednesday, after the Nov. 10 exam.

“I thought I was going to get one wrong in the sociology section, but I got a perfect score,” Baek said.

Baek was born in Samgi Township in Goksung County, a fishing and farming area between the Seomjin River and Mount Jiri. His school, Goksung High, has a total of 450 students, with 147 seniors. Over half the students live in the school’s dormitory.

“Goksung County, with a population of 31,400, does not have a single college prep hagwon [private academy], and I have not received any private education,” Baek said.

During his three years of high school, Baek said he spent his time studying in the Goksung dormitory. Every day, he would review what he had learned that day to ingrain the concepts and principles in his mind.

He said that back in middle school, he tried to attend hagwon in Namwon, North Jeolla, but “the distance was so far, I gave up in four days.”

Instead, he opted to take intensive English-language classes offered by his high school during his study hall two to three times a week, which he said was “extremely helpful.”

An avid reader, Baek said, “In the countryside, where there is not a single college prep hagwon, the only way to develop logical thinking skills was by reading many different books.”

Baek said he also had a head start with his parents, who were avid readers themselves.

With the test out of the way, he has now set himself another lofty goal.

“I want to become a wonderful diplomat like UN Secretary General Ban Ki Moon and solve disputes in the world,” Baek said.