Triplets share the joy and pain of military service

Triplets share the joy and pain of military service 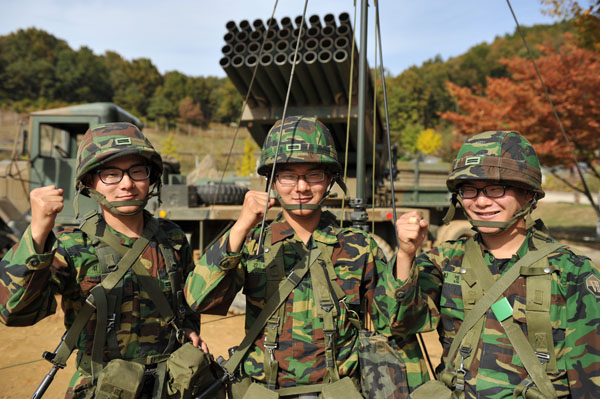 Triplets Kim Myeong-gon, Myeong-gyu and Myeong-gi - all of whom are ranked private first class in the 7th Artillery Unit of the Korean Army - pose for the camera. Provided by the Army


People have long thought there is a mystical connection between identical siblings, leading them to share interests or occupations. While this idea is still controversial, a set of Korean triplets has provided at least one example of its veracity.

The three are Kim Myeong-gon, Myeong-gyu and Myeong-gi. They attended the same schools and later went on to enroll in the same university. Today, they are aspiring game programmers currently studying IT engineering at Kyungdong University in Sokcho, Gangwon. All three are also communications radio operators at the rank of private first class in the 7th Artillery Unit of the Korean Army.

The three enlisted in the Army together in January after watching the news about the North’s shelling of Yeonpyeong Island last November.

“After we watched the North’s shelling of Yeonyeong Island, we wanted to contribute to our nation’s security,” said Myeong-gon, the oldest. “For now our goal is to carry out our duty to the national defense, but when we are discharged we want to make a game that is a global hit.”

According to an Army representative, the three are model servicemen. All are first-class marksman. And they all completed the 100-kilometer march that is part of the hard-core ranger training, carrying each others’ gear and helping each other along the way.

“I think we’re lucky to be able to serve in the same unit,” said Myeong-gu, the middle child. “And as we all have the same job, at times we compete and at times we help each other. I think we learn a lot from each other.”

They’ve also gone through hardships together. When they were in seventh grade, their mother passed away. But they’ve said that being together made it easier to overcome their grief.

The biggest question may be whether people get confused about who’s who. After all, they have similar faces, voices and body types. They also wear similar glasses.

One soldier recalled an incident in which he finished a night watch and had to wake up the next patrolman, one of the Kims. But since he didn’t know who was who, he just woke all three of them up.

The triplets also said that when they play football with friends, their teammates don’t always pass the ball to them because they aren’t sure which of them is on their team.

The triplets say the biggest advantage of being in the military together is that the experience is more enjoyable.

“I often go to my older brothers when I have concerns or doubts,” said Myeong-gi, the youngest. “I guess in that sense my military life is more fun and less harsh.”