Rep. Park Geun-hye says 2012 will be her last chance

Rep. Park Geun-hye says 2012 will be her last chance 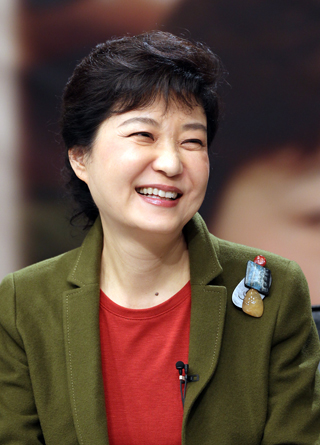 Calling next year’s election her last chance to become president, Representative Park Geun-hye, former chairwoman of the Grand National Party, said she would strive to realize her dreams and pushed back against criticism that she had allowed liberal software mogul Ahn Cheol-soo to outpace her in polls by resting on her laurels as longtime front-runner.

Park sat down for an interview with the JoongAng Ilbo and JTBC on Thursday to mark the broadcaster’s launch. It was her first media interview in four years since she ran in the GNP presidential primary in 2007 and was aired Thursday night.

“I don’t think we can win if we just stay where we are,” she said of the GNP’s prospects in the April legislative elections. “We have failed to attend to the people’s lives. We failed to keep promises, and our efforts to communicate with the public were insufficient. That’s why the people are ringing the alarm.”

But she disagreed with calls from some from within the GNP to dismantle the party and regroup into a new conservative party. “It is irresponsible to launch a new party just because the situation has grown worse,” she said. “That won’t advance our politics.”

Rather than abandoning the party, Grand Nationals must make an earnest effort to completely overhaul the party, she said. “Winning back the public trust is harder than creating a new party,” she said. “And the GNP must have a new vision and new policies.”

Noting the liberals’ efforts to unite against the GNP ahead of next year’s elections, Park said the conservatives must also push for a grand merger. Asked if she would play a role in such effort, Park remained vague, saying, “A political party is to be operated by the people who share the same will and ideas. They must go together.”

She also said that among the GNP’s reforms should be an overhaul of the legislative nomination process. “Nominations shouldn’t be decided by a few powerful people. They should be convincing, transparent and open,” Park said.

Park also addressed Ahn’s meteoric rise and how it affected her Blue House prospects. Asked if she felt threatened by Ahn, Park only said, “It is a grave crisis that existing political parties are distrusted by the public.”

She also said politicians must devote their energy to restoring party politics and performing their roles, rather than paying attention to political engineering. The people’s lives must always be the center of the politicians’ attentions, Park added.

“I have dreams that I want to realize through politics,” Park said. “And that’s why I am in politics. I am working hard to realize the dreams. I think [2012] is the last chance.”

She disagreed that she had become complacent about her long-time front-runner status and allowed Ahn to eclipse her. “That’s not true,” she said. “I have always said that there is no such thing as an invincible Park Geun-hye. The truth is that I was not in a position to take initiatives. There were many [government policies] that I disagreed with,” she said. “If I had stepped up, bypassing the party leadership, there would have been larger troubles. I think my reservation was misunderstood.”

She said she felt regret when she heard the nation’s youth tell her that they had given up on courtship, marriage and having children because of economic hardships.

“I feel sorry that I could not resolve unemployment, high tuition and high housing prices,” she said. “I will do my best to resolve them.”