A postwar staple sees a revival

A postwar staple sees a revival 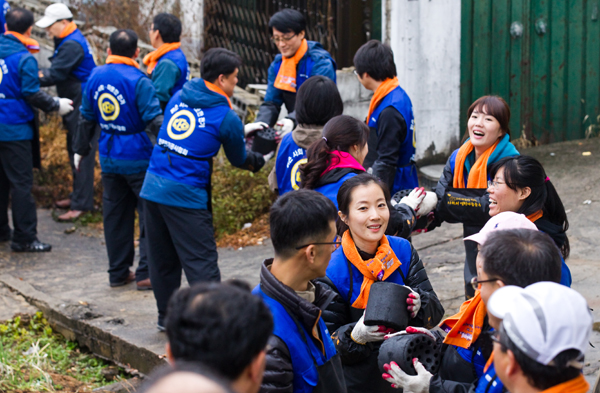 Employees from the Korea Electrical Contractors Association deliver coal briquettes, used to heat homes, to low-income families on Tuesday in Paju, Gyeonggi. Many charities hand out coal briquettes to the needy at the year’s end. By Kim Seong-ryong

At 4 a.m. at a coal factory in Siheung-dong, southwest Seoul, on Tuesday, two workers carefully loaded 3,000 coal briquettes onto trucks.

The coal briquettes, said Lee Pyo-yeol, 55, one of the workers, were to be donated to low-income families in Gyeonggi.

“We can’t let the stacks of coal fall over, so we have to drive under 40 kilometers per hour,” Lee said.

The yeontan - cylindrical-shaped coal briquettes pierced with holes on top that are used for heating and cooking - were then taken to Paju, Gyeonggi. There, 80 volunteers from the Korea Electrical Contractors Association and Love Coal, a volunteer organization founded in 2004, went from home to home to deliver the coal to mostly senior citizens who have difficulty moving.

“In this area, there are many households that still use coal. Every winter, we get many questions about when the coal will be sent out,” said Choi Bo-hee, 27, an assistant administrator for Love Coal who was volunteering that day.

Coal briquettes first got their current shape toward the end of the 19th century in Kyushu, Japan, where coals were pierced with holes to enable it to burn better. They were introduced to Korea in the 1920s when coal was rare and not readily available in the country, only to become available for the masses in the postwar era.

At the end of 1963, some 400 coal factories throughout the still-recovering nation produced the briquettes to keep the population warm, becoming the primary source of heating until the early 1980s. After hitting its peak in 1986, with 24.25 million tons of coal produced, coal use went into decline.

By the second half of the 1980s, alternative heating such as gas and oil boilers became popular, and by 1999 coal production was just a one-twentieth of what it was in 1986. Now, there are just 50 coal factories left in the country and two in Seoul.

But despite the decline in coal production, demand for coal briquettes has seen a recent surge, a consequence of both a greater initiative by charity groups to assist the underprivileged - many of whom still rely on the traditional heating method - and the tough economy.

According to Coal Bank, a charitable organization that donates coal and was founded in 2002, 250,000 households used coal last year, and since 2003, there has been a gradual increase.

Coal’s revival also stems from its cheap cost compared to other forms of fuel.

“Coals cost 500 to 600 won per briquette. For 1,500 to 1,800 won a day, you can spend a warm winter. The more difficult the economy is, and the colder the weather is, the more coal is used,” said Kim Du-yong, 60, director of the coal division of gas company Samchully, which started out in briquette manufacturing in 1955.

Coal distribution has also become one of the most popular volunteer activities in the wintertime.

Since 2006, the honorary chairman of Maeil Dairies and company employees have delivered coal briquettes to low-income families. On the same day, a house in Susaek-dong, northwest Seoul, had a warm floor thanks to the 300 coal briquettes it received from the company in October.

SK has also donated and distributed coal briquettes since 2005, S-Oil since 2008 and Gumho since 2009. Politicians are also active volunteers, as well as celebrities who often lend their names to the cause.

“For those who cannot install gas boilers, [donating coal] helps enforce the image that corporations and politicians are aiding the underprivileged,” said Jeon Chang-jin, 49, a sociology professor at Sogang University.

“Isn’t there a saying ‘don’t kick coal briquettes carelessly?’?” said Kim Seong-beom, 43, a volunteer for the Korean Red Cross. “The use of coals will be around for a while.”