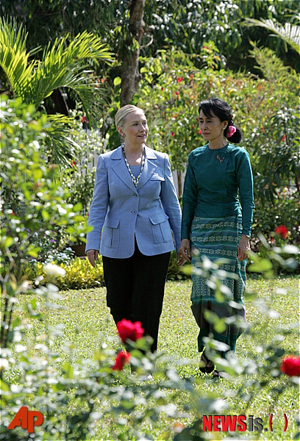 WASHINGTON - U.S. Secretary of State Hillary Clinton pressed Myanmar on Thursday to live up to its promise to end military cooperation with North Korea.

After meeting with President Thein Sein in the Myanmar capital of Nay Pyi Taw, Clinton said the Myanmar president presented a “comprehensive vision of reform, reconciliation and economic development” for his nation, including nonproliferation commitments regarding North Korea, the release of political prisoners and fair by-elections.

“We support the government’s stated determination to sever military ties with North Korea,” she told reporters, according to a transcript released by the State Department.

There have been reports of shipments of military equipment from North Korea to Myanmar and the United States suspects that Myanmar might be seeking North Korea’s help for a nuclear weapons program.

Clinton is on a three-day trip to Myanmar, which the United States still calls Burma, demonstrating Washington’s willingness to consider engaging the nation and lifting sanctions if its iron-fisted regime adopts a path of change.

In dispatching the secretary there, President Barack Obama cited “flickers of progress” in efforts to democratize the country.

“We know from history that flickers can die out. They can even be stamped out. Or they can be ignited,” Clinton pointed out. “It will be up to the leaders and the people to fan those flickers of progress into flames of freedom that light the path toward a better future.”

She said the United States stands ready to support Myanmar if it decides to “keep moving in that direction.”

Clinton dismissed a view that the U.S. outreach to Myanmar was partially motivated by the growing influence of China.

“We are not viewing this in light of any competition with China,” she said. “We are viewing it as an opportunity for us to re-engage here. We welcome positive constructive relations between China and her neighbors.”