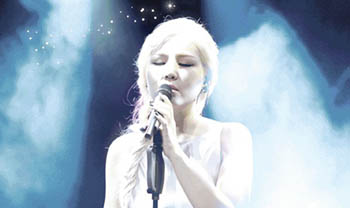 Singer ALi, best known for her performance on the reality singing show “Immortal Song 2,” will hold her first solo concert in Seoul.

The 26-year-old will perform a solo concert on Dec. 24 at the Dome Art Hall in eastern Seoul.

Her concert is titled the “White Christmas Concert” and the singer says she is looking forward to the show rather than being nervous about it.

ALi will also take to the stage in Busan with singer Lim Jeong-hee on Dec. 18 in a duet concert titled “ALi - Lim Jeong-hee: The Power Soul Concert”.

Through her agency ALi said, “These days I am so happy living each day feeling grateful for the fans who support and love my music .?.?. I am a singer and I am ready to show everything through my music.”

The singer is currently said to be rehearsing for her shows.

ALi became a star on the KBS TV show “Immortal Song 2” where she gave various performances in a multitude of musical genres. Her vocal style has been compared to soul singers from the U.S.