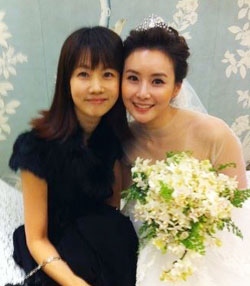 Actress Choi Jung-yoon married her fiancee Yoon of the E-Land fortune on Dec. 3 at a private ceremony in Yeoksam-dong, southern Seoul.

The ceremony shielded from local media was attended by family and close friends of the bride and groom. Some celebrities in attendance were comedian No Hong-chul, singer Hong Kyung-min and actresses Park So-hyun and Park Jin-hee with the latter receiving the bride’s bouquet.

The high-profile wedding also drew attention to the fact that monetary gifts were refused by the couple. As no wedding pictures have been revealed to the public, the actress’ agency has apologized and distributed three pictures of some prewedding shots taken at a studio.

Choi is an actress on the popular drama “Ojakko Brothers” on the KBS network and due to filming commitments, will return to production on Dec. 5. Choi’s groom Yoon is the eldest son of the E-Land group Vice Chairwoman Park Sung-gyung. Yoon is also a celebrity in his own right, being an ex-member of the 90s idol group the “Eagle Five.”