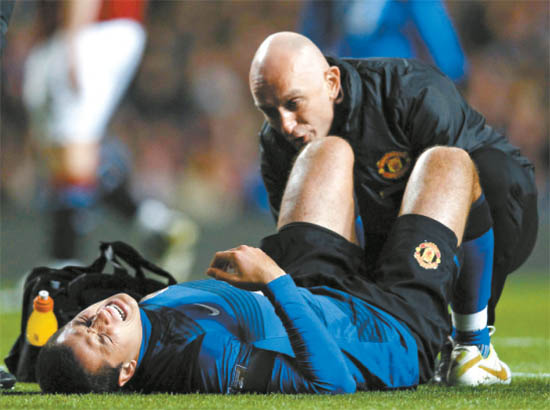 Manchester United’s Javier Hernandez is treated for an injury before being stretchered off during the English Premier League match against Aston Villa at Villa Park in Birmingham, England, Saturday. [REUTERS/YONHAP]

Manchester United striker Hernandez tore ligaments in his ankle and was stretchered off early in the first half of the 1-0 victory over Aston Villa.

Hernandez collapsed on the turf after landing awkwardly, with no Villa player near him, and was in obvious pain when he was helped off the field by United’s medical staff.

And Ferguson admitted the 23-year-old is unlikely to play again this year.

“Javier has torn ligaments in his ankle and will be out for three to four weeks,” said the United manager.

“It’s a bad time for us but it’s just as well that we’ve got a strong squad.”

Ferguson will also be without Michael Carrick for the Champions League tie with FC Basel on Wednesday as the midfielder is suspended.

But the United manager was relieved to get back on track after his League Cup embarrassment against Crystal Palace on Wednesday.

Phil Jones’ first senior goal enabled United to stay five points behind rivals Manchester City in the title race, and Ferguson has lost only once in his last 17 Premier League games.

“There’s no doubt we deserved the win,” Ferguson said. “Away from home at Villa Park is always a hard game to play.”

“We had great possession, but at times, we were a bit wasteful with chances in the second half. Phil showed great movement for the goal, it was a great cross from Nani and a fantastic finish.

“He’s a natural center back, but he is so versatile he can play in any position. We don’t have Michael Carrick for Wednesday because he is suspended, and we had to look at options.

“Because of the importance of that game, we want to have options of where he can play.”

Villa has only won once in its last seven games, and manager Alex McLeish also lost Republic of Ireland international Shay Given and Jermaine Jenas with injuries.

Given was stretchered off with a hamstring problem while Jenas - who made his first Villa start - left the ground on crutches with an Achilles injury.

McLeish also had to drop Charles N’Zogbia from his squad after the France international allegedly failed to turn up for medical treatment.

“Charles broke a club rule and had to be disciplined,” the Villa manager said. “He’s got to take it on the chin and show us the great player he can be.

“There’s no favoritism and he knows that he’s not done the right thing. There will be something internal too.

“I’ve got to say that since the start of the season anybody has given me an outstanding performance. I’m looking for people to pick up the baton.

“We didn’t do enough to hurt United in the first half and they were in complete control of it. But in the second half we were much better - but against United you have to capitalize on those opportunities.”