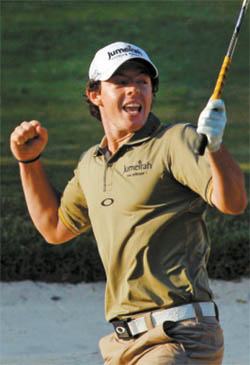 HONG KONG - World No. 2 Rory McIlroy sealed the $2.75 million UBS Hong Kong Open yesterday by holing a birdie chip from a bunker on the last, keeping alive his slim hopes of denying Luke Donald an historic Order of Merit double.

“I think that’s the most excited I’ve ever been on a golf course,” said the 22-year-old. “It was just incredible to see the ball drop and realize that I had won this tournament.”

A final-round 65 clinched a two-stroke victory for the Northern Irishman and the winner’s check of $458,330 means the U.S. Open champion still has a chance to overtake current Race to Dubai leader Donald with a victory at the season-ending Dubai World Championship next week.

Englishman Donald, who has already won the U.S. PGA Tour money list, skipped the Hong Kong event as did Germany’s Martin Kaymer, who had been placed second in the Race to Dubai until McIlroy’s heroics today.

“Everything’s dependent on Luke because he has got such a big lead but that was one of my intentions going out today, to win this tournament to keep myself in with a shout next week,” said McIlroy.

“Another bit of motivation was I woke up this morning and saw Lee Westwood had shot 62 at the event in Sun City [South Africa] and I thought I really needed to win to stay about him in the world rankings. So it was nice to be able to do both.”

McIlroy had started the final round three strokes behind overnight leader Alvaro Quiros of Spain but five birdies over the course, three coming while the pressure was building in the run-in to the clubhouse, ensured victory for a player who had finished runner-up here in both 2008 and 2009.

“If feels like it has been a long time coming,” he said. “I played my first Hong Kong Open in 2007 and I felt like it owed me something after losing the playoff [to Taiwan’s Lin Wen-Tang] in 2008. To get my hands on this trophy and to win this tournament is very special.”

After finding the sand next to the 18th green with his approach shot, McIlroy blasted up, out and into the hole to thunderous applause while pumping his fists in celebration.

He had earlier announced via Twitter that he had brushed off the ailment that had been bothering him all week thanks to “11.5 hours sleep and a 5km run” and he returned after finishing his round to declare to his followers “Winner winner chicken dinner.”

“I’ve not been feeling well all week so I went down this morning and got a really good sweat up,” said McIlroy. “It seemed to work.”

McIlroy had certainly been looking fragile over the first three days of this event - which is co-sanctioned by both the European and Asian Tours - but his stamina was never in doubt today and a birdie on the par-five second set him off in just the right mood.

Quiros, who had led or shared the lead in the event for all three days coming into Sunday, faded with a three-over 74 to finish on seven under and