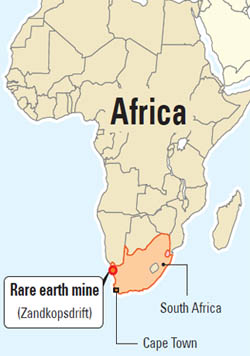 Korea is expected to take a lead in the heating-up battle to secure rare earth minerals, which are used in smartphones, flat-screen TVs, and hybrid and electric vehicles, among other modern technologies.

Five Korean firms, including Samsung C&T and Hyundai Motor, have formed a consortium with the Korea Resources Corporation (Kores) to buy a 10 percent stake in a rare earth mine in South Africa, according to the state-run Kores.

This marks the first time that a Korean consortium has acquired a share in an overseas rare earth mine development project. The other parties are GS Caltex, Daewoo Shipbuilding & Marine Engineering E&R and Aju Corporation.

According to Kores, the deal to explore and develop rare earth materials as part of the Zandkopsdrift project promoted by Frontier Rare Earths was formalized last Thursday in Johannesburg, South Africa, after an original agreement was made in July.

The deal also includes a clause allowing Korea to acquire up to 30 percent of production after development. Preliminary exploration work will begin next year, with 20,000 tons of materials to be produced annually from 2016.

The consortium will be responsible for producing up to 6,000 tons a year, or double the current level of demand in Korea.

The rare earth mine is located in Namaqualand in the northern region of South Africa’s Western Cape province and is known to have up to 39 million tons of rare earth deposits.

The agreement comes at a crucial time as countries vie to securing the precious minerals, which are key components in the manufacturing of TVs, computers, hybrid cars and advanced weaponry.

Although Korea is a leading exporter of semiconductors and smartphones, 95 percent of the rare earth materials used in making these high-tech items come from outside the country. This is a growing problem as the price of earth minerals has jumped from $10,000 per ton in 2009 to $123,000 last month.

China, which has the largest natural reserves of rare earth minerals, made matters worse last year by declaring that it will impose export and production quotas to curb its quickly depleting reserves. Beijing further decided that the relatively cheap cost did not match the value of the product.

The United States has the second-largest volume of reserves, while Australia, India, Canada and South Africa also have large deposits. At present, China supplies 97 percent of world’s demand.

The acquisition of the stake in the Zandkopsdrift mine will give Korea greater autonomy in terms of meeting demand, he added.