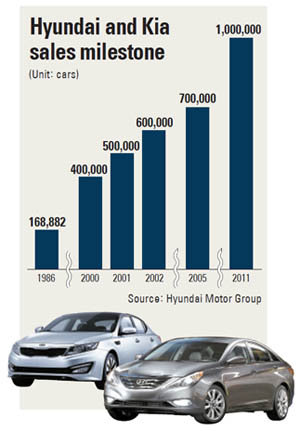 Hyundai Motor and its affiliate Kia Motors, the country’s two largest automakers, are firming up their respective positions in the U.S. market after racking up combined annual sales of 1 million units there for the first time last week.

The new sales landmark is even more significant in light of the country’s relatively short automotive history. It comes as Korea’s National Assembly recently passed the long-pending Korea-U.S. free trade agreement bill that is expected to take the nation’s automotive industry to a new level. In the past, the local industry was considered too small and oversaturated for automakers to achieve their aggressive sales goals.

Hyundai and Kia also have factories in the U.S. that give them something of a competitive advantage.

The U.S. is the third country in which the two have managed to reach this milestone after they did so earlier in Korea and China.

It also means the pair control almost 10 percent of the U.S. market.

According to Hyundai Motor Group, the steep rise was driven by the launch of new models such as Hyundai’s Sonata and Elantra and Kia’s Sorento and Optima.

The news shows the two carmakers’ dramatic rise from humble beginnings when their vehicles were viewed disdainfully as second-rate.

When Hyundai Motor began exporting its Excel to the U.S. in 1986, few expected the Korean company would be able to secure a solid position in the competitive auto market as it quickly built a reputation as being cheap and low-quality.

As it struggled to break into an industry dominated by entrenched brands like General Motors and Chrysler, as well as Japanese brands like Toyota and Honda, Hyundai only sold 168,882 cars in its first year, accounting for less than 2 percent of the market’s annual sales.

Kia Motors also fared poorly in the U.S. before it merged with Hyundai in the late 1990s.

A Hyundai official said that the group’s “focus on product localization and quality control, as well as brand promotion” helped its star rise in the U.S.

He also expressed hope of seeing sales further expand next year with the advent of the Korea-U.S. FTA, which is slated to take effect from early next year.

Within four years, Hyundai and Kia will benefit from the removal of a 2.5 percent tariff on cars.

The Korea Automobile Manufacturers Association forecast that the agreement will enable the two automakers to upgrade their brand image in the U.S. and other countries like Brazil, Russia, India, China and South Africa.

Despite the rosy outlook, however, challenges remain due to volatile global market conditions and the grim prospects facing the U.S. economy.

Meanwhile, the big three U.S. automakers of Ford, Chrysler and General Motors are slowly finding their feet after declaring bankruptcy in the wake of the collapse of Lehman Brothers in 2008.

And more competition is expected from Japanese automakers and manufacturers of auto parts as they recover from a massive earthquake in March that halted production and undermined supply lines to the U.S.

Hyundai and Kia could also benefit from an image makeover in the U.S., where they still trail Japanese brands like Toyota, Honda and Nissan in terms of branding.

Based on January-November sales, General Motors secured the top market share in the country of 19 percent, followed by Ford with 17 percent, Toyota with 15.2 percent, Honda with 10.5 percent and Chrysler with 9.4 percent. Hyundai and Kia have a combined 7.8 percent, the same as Nissan.

Executives for the group said aggressive marketing is expected to further boost sales next year.

In the meantime, the two automakers have been focusing more on overseas markets as the already sluggish domestic market looks set for another contraction due to the influx of import brands.

Kia forecast that it will see domestic sales contract 1.1 percent next year.