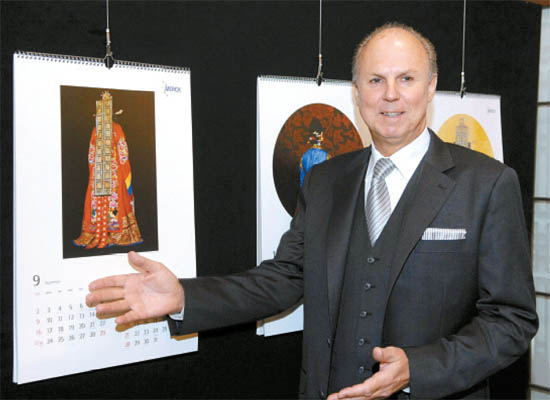 
Juergen Koenig, CEO of Merck Korea, welcomes the passage of the Korea-U.S. free trade agreement and hopes that the Korean pharmaceutical industry takes full advantage of it.

Koenig said the controversial Korus FTA would help Korean consumers get access to a variety of quality drugs at lower prices.

“I don’t understand why some Koreans are afraid of opening the market to the U.S.,” Koenig said in an exclusive interview with the Korea JoongAng Daily. “The Korean economy is strong enough to compete with the U.S.”

He pointed to the automobile industry as one of the country’s most competitive industries. “My car is Hyundai Motor’s Equus. It is a good car, not only because it uses Merck’s pigments,” Koenig joked.

Koenig, who has been in Korea for three years, says the country is competitive enough to stand shoulder to shoulder with advanced economies like the U.S.

Merck, a German-headquartered multinational drug and chemicals company, has been running for 344 years in 67 countries around the world through 13 generations of the Merck family. Founded in 1668 by Fridrich Jacob Merck, who was a pharmacist, the company started as Engel Apotheke, which means Angel Drugstore in German. The drugstore was transformed into a chemicals company in 1827 by Heinrich Emanuel Merck, but the original drugstore still runs today. “We experienced the two world wars, but our drugstore still exists,” Koenig said.

However, he said the Korean government’s policy to lower prices can be a stumbling block for foreign pharmaceutical companies wanting to enter Korea. “There are erroneous parts in the structure of the Korean pharmaceutical industry,” he said.

Koenig said that the local industry’s structure has problems that cause foreign drug makers to avoid investing in research and development.

When he first came to Korea, Koenig called for “ethical marketing” for all of Merck’s businesses in Korea. “But the head of the pharmaceutical business was opposed to it, saying it is impossible to do ethical marketing in the drug-making business,” Koenig said.

Being skeptical about the government plan, he expressed worries that foreign drug makers could want to withdraw from the Korean market, “if drug prices become lower here than in Bangladesh or Indonesia.”

Merck is known as a company that makes investments with a long-term perspective. The company started investing in liquid crystals from the late 1980s. It now takes up 60 percent of the local LCD panel market. Although Merck’s pharmaceutical business accounts for a mere 5 percent of its total sales, the figure is on the increase.

Merck set up its first representative office in Korea in 1985. For the first few years, the office in Korea focused on importing and distributing products by Merck and investing in the liquid-crystal display industry. Then it launched its pharmaceutical operation in 1999. The company established an R&D center for more investments in liquid-crystal displays, Merck Advanced Technologies, in 2002.

Merck recently held a press conference to launch its 2012 calendar. Koenig himself is in love with Korean art and culture. He started making calendars featuring works of Korean artists from 2009. Last year, he wanted to show Korean modern art. This year, he chose very traditional art. He found a Korean artist who draws Korean women in traditional hanbok (traditional Korean dress) from behind.

“Drawing the women from behind helps viewers focus on the beauty of the traditional clothes,” Koenig said. “I want to let the world know about Korean arts.”