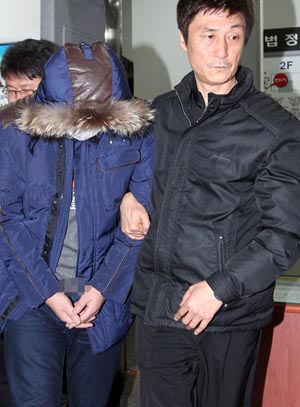 Policemen take away a 27-year-old man surnamed Gong, left, a driver for Grand National Party lawmaker Choi Ku-sik, on Saturday after a hearing that led to a judge issuing a detention warrant against him for investigations. [YONHAP]

Police Friday arrested an aide of GNP Representative Choi Ku-sik on suspicion of being involved in the large-scale distributed denial-of-service (DDoS) attack against the National Election Commission’s Web site on election day.

Allegedly, the lawmaker’s chauffeur, surnamed Gong, and some friends paralyzed the commission’s Web site to prevent young voters from finding their polling stations. Analysts had predicted in the election run-up that a low voter turnout would be to the advantage of the ruling GNP.

On the day of the by-election, the Web site was shut down for more than two hours in the morning.

Opposition lawmakers over the weekend pointed out that Choi was in charge of promoting the GNP’s candidate, Na Kyung-won, through social network services as director of the party’s public affairs bureau.

Democratic Party members yesterday argued that the driver Gong, who ranks as a ninth-level civil servant and earns about 1 million won ($886) per month, would not be capable of carrying out the impressive cyber crime.

“Such an attack is a grave crime, and perpetrators can be sentenced to 10 years in prison,” said Lee Seok-hyun, a DP lawmaker.

The DP yesterday launched a special investigative committee and pushed the GNP to take responsibility for the attack.

“We would push ahead a parliamentary investigation if the police investigation is hampered or postponed,” DP floor leader Kim Jin-pyo said at a meeting with lawmakers.

Lee Jong-kul, a DP lawmaker, released a statement yesterday that read, “The cyberattack on the NEC is like the rigged presidential election in 1960. Choi and GNP Chairman Hong Joon-pyo should immediately step down.”

Jolted by the accusations that the ruling party was behind the attack, Hwang Woo-yea, GNP floor leader, told reporters at a press meeting yesterday: “Based on the current investigation by police, we are thinking that it is [Choi’s] situation, not the party’s.”

A high-ranking GNP lawmaker told the JoongAng Ilbo yesterday, “The resignation [of Choi] is inevitable.”

The 27-year-old driver has denied all allegations. But police found that he and a hacker friend had cellphone conversations about 30 times on the eve of the by-election. The suspects said they were talking about online gambling.

The police have raided the hacker’s company and house in Daegu. They will investigate bank accounts of the driver and the hacker to see if they exchanged money.