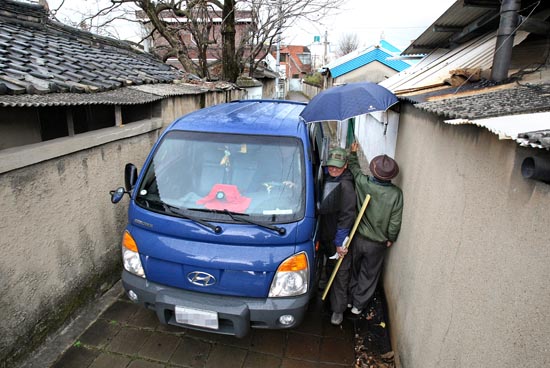 Residents pass by the street, trying to avoid getting a hit by a truck nearby Ansim 1-dong at Dong District in Daegu. The Dong district office said that 2.5 billion won (2.21 million dollars) of budget for widening the road was fixed in the beginning of the year but the project is postponed due to additional welfare budget operated by the central government. By Gong Jeong-sik


As the central government of Korea has scrambled to implement new welfare policies, local governments are forced to cut money that is needed for important policies.

The Gangbuk District Office in Seoul said it has cut a total of 7.8 billion won ($6.92 million) that was supposed to be used for education and local street maintenance.

As the Gangbuk office has decided to cut funding, the money for running a public child care service center has been reduced as well, and officials in Seoul’s local governments lamented that they are forced to cut additional funding in order to support the central government’s welfare policies.

The Gangbuk office said that it has cut a total of 165 million won that was designed to support one of its local child care service centers, the Nightingale Day Care Center, which takes care of babies up to four years old, in order to support the central government’s free school lunch program. The free school lunch program aims to support elementary school students eight years and up. The day care center will not receive its 60 percent of utility expenses funding, including air conditioning and heating, and its snack expense budget for each baby will be reduced from 10,900 won to 900 won.

“I know that it’s a very poor decision,” an official of the Gangbuk office told the JoongAng Ilbo. “But we had no other options but cutting it because we have to provide money for the newly implemented welfare policies including the free school lunch program that is provided by the central government and politicians. We’re worried that additional welfare policies - basic old-age pension, for instance - would make us cut more of the welfare budget as they are waiting for the National Assembly’s deliberation on the budget.”

The official said there are 100 day care centers suffering from the same problem as Nightingale’s.

The office said that the budget for welfare policies for Korean local governments has continuously increased up to 21.2 percent in the last five years while the index for the central government’s has only increased 6.3 percent. “It’s such a huge burden,” the Gangbuk official said. “The central government can provide more money by running additional businesses but the small offices like us can’t do it.”

Offices that are most influenced by the central government’s welfare policy expansion in Seoul are the Jungnang District Office and the Gangbuk office. Outside the capital city, departments in Daegu and Busan are having similar troubles to the Gangbuk office. In Dong District, Daegu, there is a small road that has only three meters left waiting for widening. The Dong office said that it needs 2.5 billion won to finish the widening project but it has repeatedly failed to secure the necessary money because the central government has continuously diverted the money to welfare policies.

“We’ve been trying to secure money for the project in the last two years as we’ve received tons of complaints from residents, but we had to spend the money for the central government’s welfare programs,” said Seo Ja-won, official at the Dong District Office.

In Busan, the Buk District Office has failed to run education welfare programs that were planned for children from low-income families.

“We’ve developed a plan of running necessary welfare policies including running an after-school English program for children from low-income families and developing a playground for disabled people, but we had to postpone them,” Hwang Jae-gwan, official at the Buk district office said. “It’s almost impossible to develop our own welfare programs if the central government keeps increasing the budget for welfare policies.”