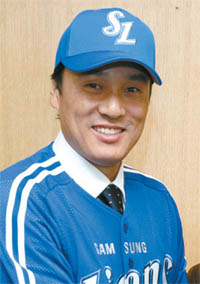 The Daegu Samsung Lions announced yesterday that Lee has signed a one-year deal worth 1.1 billion won ($973,000) including 300 million won in bonus options.

“I didn’t think I would ever come back,” Lee said through the team’s press release. “I can’t describe how happy I am to return.

“The Lions were my home at heart, and I had such good memories with the team,” Lee said. “I felt sorry when I left for Japan, but I appreciate that I’ve gotten an opportunity to give back what I received [in the past].”

Lee is considered the Lions’ franchise star and one of the best sluggers in KBO history. The 35-year-old made his professional debut with the Lions in 1995 and played until 2003 before moving to Japan’s Nippon Professional Baseball league.

The Daegu-born player has won five MVP awards in his nine KBO seasons, in addition to leading the league in home runs five times and in RBI four times. Before leaving for NPB, Lee had a career .305 batting average, 324 home runs and 948 RBI. A highlight of his career came in 2003 when he passed the KBO’s all-time single-season records with 56 home runs and 144 RBI.

In NPB, Lee has played for the Chiba Lotte Marines, the Yomiuri Giants and the Orix Buffaloes.

He enjoyed some success early on, winning the Japan Series with the Marines in 2005 and the Giants in 2009.

But left-thumb and knee injuries have derailed his career over the past four seasons. Last year, he managed to hit only .201 with 15 home runs in 122 games with the Buffaloes. Lee’s career in NPB will end with a .257 batting average, 159 home runs and 439 RBI in eight seasons.

Now back in the KBO, Lee is expected to break the all-time career KBO home run record that is held by now-retired slugger Yang Joon-hyuk who amassed 324 career home runs. Lee is just 27 behind Yang.

The addition of Lee should boost the Lions’ offense following the team’s “triple crown” season, during which it finished first in the KBO regular season and won both the Korean Series and Asia Series.

The team hopes Lee will add to the lineup’s left-handed power along with Choi Hyung-woo, who led in home runs (30), RBI (118) and slugging percentage (.617).

The Lions manager, Ryu Joong-il, said he will put Lee in the three-hole on the batting lineup and Choi as the cleanup hitter.

As for his fielding position, Lee is expected to play at first base, which was previously taken by Chae Tae-in.