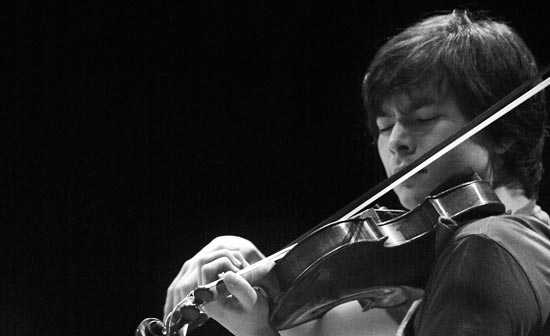 
For many Koreans, American violinist Stefan Pi Jackiw is best recognized as a member of the all-male classical chamber music ensemble Ditto, which possesses a status akin to that of a K-pop group here, and as the grandson of the famous Korean essayist Pi Chun-deuk.

Even without such a fancy pedigree, however, the 26-year-old is already a serious wunderkind who was praised by the Chicago Tribune as a musician who “could be a legend in the making” for his “flawless technique, precocious musical understanding and sweet singing tone.”

On Nov. 26, he gave his second solo recital in Seoul, two years after his first, and it was filled with pieces written by 20th-century composers such as Igor Stravinsky, Aaron Copland, Witold Lutoslawski and Richard Strauss.

“In the first concert I played works that I loved, but more from the classical romantic period such as Beethoven, Brahms and Chopin,” he said in an interview at a hotel in central Seoul three days before the concert. “This time I wanted to do something that I love, but from what I understand are not frequently played in Korea, and that will add four different flavors.”

Regarding Copland, in particular, Jackiw said the composer’s Sonata for Violin and Piano is one of the greatest American pieces for violin and as an American violinist he wanted to bring American music to Korea.

Born in Boston to a physicist mother (Pi’s daughter) and a physicist father of German descent, Jackiw made his professional debut at age 12. He garnered the prestigious Avery Fisher Career Grant in 2002 and has appeared as a soloist with a number of orchestras - the Boston, Chicago, Cleveland and New York Orchestras as well as the Philharmonia Orchestra in London, Deutsches Symphonie-Orchester Berlin and Seoul Philharmonic Orchestra. He studied psychology at Harvard University and holds an artist diploma from the New England Conservatory.

Jackiw joined Ditto in 2008 and has since performed in an annual music festival centered around the ensemble that is led by violist Richard Yongjae O’Neill. When asked about the heated public attention to the attractiveness of the Ditto members, he responded that it is a “tricky thing as a performer because as a performer you never want to be the center of attention,” while acknowledging that the ensemble “is marketed in a way that appeals to young people, who probably have never been to a classical music concert.”

He added that while building an audience for the ensemble is crucial, marketing can be a “double-edged sword.”

Although a number of media outlets have hailed Jackiw as a violin genius - given his musical talent from very young age and shining academic accomplishments - he instantly answered “certainly not” when asked if he thinks he is one.

“I think genius is a word that people use a lot,” he said. “Let’s be real. Genius is Mozart, Mendelssohn, Beethoven and Schubert. I am not like that.”

He added that he thinks the word “prodigy” is also used a lot when it comes to describing musicians, but often inaccurately.

When asked to name one of his most memorable performances this year, the New York-based globe-trotter mentioned the collaboration he did with the YouTube Symphony Orchestra in March. Musicians around the world were invited to audition for the opportunity to participate in a week of rehearsals and performances at the Sydney Opera House. Jackiw performed the third movement of the Mendelssohn Violin Concerto in E minor, Op. 64, at the invitation from the American conductor Michael Tilson Thomas.

“Thousands of people submitted videos on YouTube and visitors to the site voted to choose 100 orchestra members. It was a very amazing event,” he said.

The live performance was watched by 33 million people worldwide on YouTube, breaking the previous record of 10 million for U2.

Jackiw said that the next musical challenge he hopes to accomplish in the near future in Korea, which he said is an important part of his heritage, would be to work with Maestro Chung Myung-whun of the Seoul Philharmonic Orchestra.

“He seemed so naturally musical,” he said. “His music makes him look very joyous. I’d love a chance to work with him.”