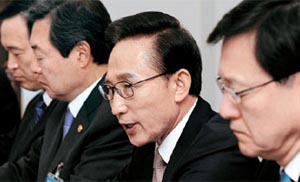 Some four out of 10 salaried workers and self-employed entrepreneurs did not pay income tax last year thanks to various tax cuts and benefits, data showed yesterday.

The report was made as the government and political parties are currently arguing over implementation of the so-called “Buffett tax” that levies higher taxes on those with high incomes.

According to the National Tax Service and the Korea Institute of Public Finance, among 20.39 million salaried employees and self-employed businessmen, 8.39 million, or 41.1 percent, did not pay any income tax as their income fell below the taxation standards thanks to various tax cuts and benefits.

Currently, the maximum income tax rate in Korea is 35 percent. Considering that the average tax rate of Organization for Economic Cooperation and Development (OECD) member countries is 35.5 percent, Korea’s rate is not low.

However, recently there have been arguments that too many people are exempted from paying income tax.

This is because more people are exempted from paying income tax due to various tax cuts and returns. Such tax benefits include temporary tax returns on investments, tax cuts on foreign companies’ investments, and tax exemptions for golf clubs and casinos.

Some argued that the government should create a new income category for high-income earners and include a 40 percent tax on their income. If that happened, roughly 1 trillion won more could be secured.

Hong Joon-pyo, chairman of the GNP, recently argued that it is not appropriate to disregard income level in setting tax rates and stressed the need to adopt the Buffett tax.

The government, however, claimed that a sudden increase in taxes would only create confusion.

Minister of Strategy and Finance Bahk Jae-wan said that while the government has retreated from making additional income tax cuts, adding additional taxes would be too sudden of a change. Bahk is known as a strong advocate for tax cuts.

The Lee Myung-bak administration has been trying to make additional tax cuts in hopes of encouraging consumers to spend more and therefore stimulate the domestic market. However, amid growing fears of another recession and public anger mounting against those with higher incomes, the government yielded to political pressure and scrapped its plan for an additional tax cut.

Some cautioned against the move to suddenly reduce tax cuts and similar benefits.

The Korea Federation of Taxpayers argued that the government has already made several moves to reduce tax cuts and benefits and further moves may only hurt the more vulnerable lower-income class.