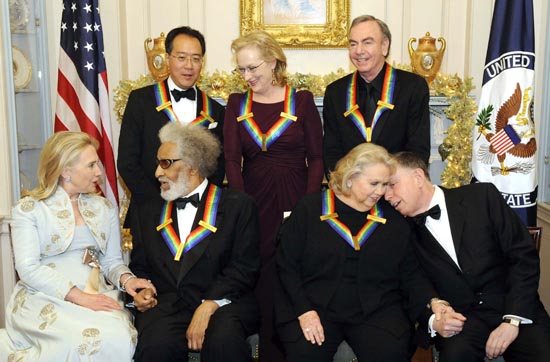 WASHINGTON - Meryl Streep may have her next film role, and Neil Diamond thanked the namesake of his “Sweet Caroline” as they and others including cellist Yo-Yo Ma received the top award for those who have influenced American culture through the arts, the Kennedy Center Honors.

Caroline Kennedy, who hosts the show as part of a living memorial to her assassinated father, John F. Kennedy, acknowledged her personal connection to one honoree. Diamond’s “Sweet Caroline” was named for her.

“I’m going to have to thank her for that,” Diamond said before the show.

Earlier, President Barack Obama praised the actors and musicians at the White House. “They have different talents, and they’ve traveled different paths,” Obama said. “And yet they belong here together because each of tonight’s honorees has felt the need to express themselves and share that expression with the world.”

Classical music stole the show’s finale with surprise tributes from Stephen Colbert and Elmo from TV’s “Sesame Street.” “Tonight we celebrate the greatest living cellist,’’ Colbert said “We chell-ebrate, if you will.” Ma has played cello since he was 4. At age 7, he played for Presidents Kennedy and Dwight D. Eisenhower.

Secretary of State Hillary Rodham Clinton flew home for less than 36 hours between diplomatic travels to honor the artists with a dinner Saturday night. After visiting the isolated Southeast Asian country of Myanmar, Clinton said such U.S. artists have worldwide influence by using their freedom of creativity.

Shortly after, in a toast to Streep at the State Department, writer Nora Ephron warned Clinton that the person who would someday play her on screen is the same woman who played Julia Child in “Julie and Julia’’ and British Prime Minister Margaret Thatcher in the upcoming “The Iron Lady.” Streep, 62, stood up for a better look at the nation’s top diplomat.

“It’s inevitable,” Ephron told Clinton, drawing big laughs. “You met her tonight, and I’m sure you thought she was charming, but she was just soaking you up.”