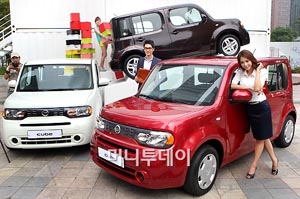 The number of imported vehicles in Korea is expected to reach a record annual high of 100,000 units for the first time this year led by growing demand.

According to the Korea Automobile Importers and Distributors Association (Kaida) yesterday, a total of 97,158 import cars were sold from January to November, which is close to its previous target of selling 100,000 units. 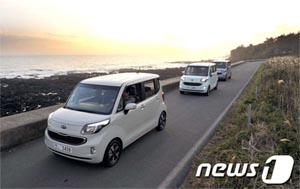 Last month a total of 9,230 import vehicles were sold in the country, up 11.1 percent from a year earlier with 8,311. The November figure represents a 12.1 percent increase from the previous month.

According to Kaida, the boost in import car sales last month was helped by steady demand for new car models.

Even before its release, the box-car type vehicle gained much attention among young consumers as they go after trendy cars to satisfy their growing appetite. Kia Motors, the country’s second-largest automaker, released its own box car, the “Ray,” last week in a move to challenge the increasingly popular Cube.

By size, vehicles with a 2.0-liter or smaller engine were the most popular, taking up 44.7 percent of the market in the cited month. Rising gasoline prices have put much pressure on local drivers, as at one point, the price of gasoline in some gas stations surpassed the 2,000 won ($1.77) per liter mark.

Cars with smaller engines are more fuel efficient. Cars with a 2.0-liter or smaller engine were followed by a 30.8 percent market share for cars with engine capacities between 2.0 liters and 3.0 liters.

By origin, European vehicles dominated the local market with a combined 68.1 percent share in November, followed by Japanese manufacturers with 23.1 percent share and U.S. automakers with an 8.9 percent share, the association said. Since last year, European carmakers including BMW, Mercedes Benz, Audi and Volkswagen, have been raising their sales based on aggressive marketing and new car launches. U.S. automakers, including Chrysler and Ford, have been less aggressive. The recently ratified Korus free trade agreement, however, is expected to raise more brand awareness of U.S.-made cars in the local market once the pact goes into effect next year as they will become more price competitive.

In the meantime, German luxury automaker BMW maintained its best-selling brand status for the 10th consecutive month since February with 1,708 units sold here last month. This was followed by Mercedes Benz with 1,673 units and Audi with 1,063 units.