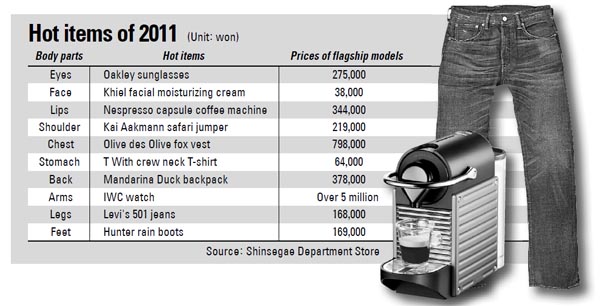 Apple founder Steve Job’s favorite, a pair of Levi’s 501 jeans, was picked by merchandisers at Shinsegae Department Store as a popular fashion item of this year, the nation’s third largest department store said on Sunday.

Shinsegae surveyed its 96 merchandisers asking them what were this year’s top 10 most popular items in terms of sales growth and customer preference, and they answered Steve Job’s favorite jeans were picked as the most popular item for legwear.

The Levi’s 501 jeans were regarded as the uniform of the creator of Apple’s iPad and iPhone in tandem with a black turtle neck and sneakers, as Jobs was often spotted wearing when he gave presentations of the world’s most popular handheld devices.

“In the case of Levi’s 501 jeans, they were sold out for four days at Shinsegae’s headquarter store in Myeongdong after Jobs passed away on Oct. 5,” an official at Shinsegae said.

According to Shinsegae, Oakley’s sunglasses were picked as the most popular eye-wear item of this year and over 10,000 pairs of Oakley sunglasses were sold. Khiel’s Ultra Facial Cream and Nespresso’s capsule coffee machine were leaders in their categories.

Shinsegae said over 180,000 Khiel’s moisturizing facial creams were sold as even male customers bought the item due to their increased awareness of skin care.

The surge in the number of smartphone users and tablet computer users in Korea affected sales of the Mandarina Duck backpack as its sales went up 37 percent from last year.

Safari jumpers manufactured by Kai Aakmann sold like hot cakes this year as more women are opting to wear warm and stylish outfits.

A total of 15,000 of Kai Aakmann’s safari jumpers produced for this spring were completely sold out, and the company sold over 40,000 safari jumpers since it released the product for the fall season.

Hunter Boots, a British rain boots brand, was named the best item of 2011 for footwear as their sales were up 700 percent in July and August this year compared to the corresponding period of last year.