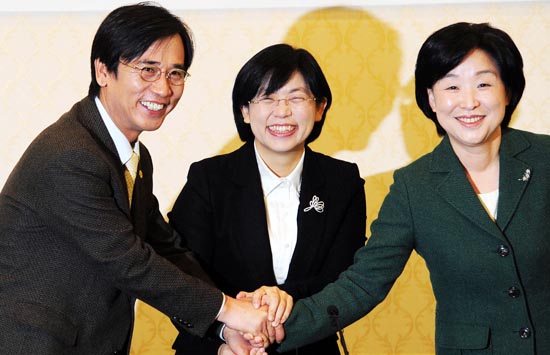 Leaders of the three liberal parties - from left, Rhyu Si-min of the People’s Participatory Party, Lee Jung-hee of the Democratic Labor Party, and Sim Sang-jeong of a nascent party split from the New Progressive Party - announce the creation of the Unified Progressive Party yesterday at the National Assembly. [NEWSIS]


Three minor opposition parties officially established a new progressive party yesterday as part of a strategy to boost their chances in next year’s general elections.

Leaders of the three parties - the Democratic Labor Party, the People’s Participatory Party and a nascent party split from the New Progressive Party - announced the creation of the Unified Progressive Party.

The new party, which now holds seven seats, hopes to increase its power to at least 20 seats in the 299-member unicameral National Assembly in the upcoming elections. That number is the minimum quorum needed for a party to be entitled to form a parliamentary negotiating bloc.

The UPP will hold a convention in mid-January to set the party platform and nomination rules for the April parliamentary elections, officials said.

Talks have been under way for months to form a united front among the minor opposition parties, but stakeholders of each party were divided over whether to form a coalition with the main opposition Democratic Party or to create a new party.

After an opposition-backed independent candidate beat a high-profile ruling party rival in October’s Seoul mayoral by-election, the opposition blocs sped up their move to create a new party.

Although the DP failed to join hands with the minor parties, political analysts still see a chance that the new party could form an alliance with the main opposition party to avoid vote-splitting in key districts.

A liberal parliament, if elected, could affect the Lee Myung-bak administration’s business-friendly policies and give momentum to growing calls by liberals to expand welfare policies.

It will be the first time in 20 years that the parliamentary and presidential elections will occur in the same year.