South will provide aid to North through Unicef

South will provide aid to North through Unicef 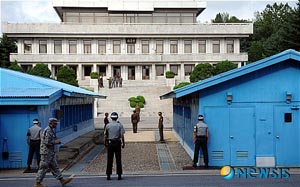 South Korea said yesterday it will donate $5.65 million for humanitarian projects in North Korea through Unicef.

The donation will benefit about 1.46 million infants, children and pregnant women in North Korea, according to the Ministry of Unification.

Seoul’s contribution will be used to provide vaccines and other medical supplies as well as to treat malnourished children next year, the ministry said.

There have been concerns that a third of all North Korean children under five are chronically malnourished and that many more children are at risk of slipping into acute stages of malnutrition unless targeted assistance is sustained.

“The decision is in line with the government’s basic stance of maintaining its pure humanitarian aid projects for vulnerable people regardless of the political situation,” ministry spokesman Choi Boh-seon told reporters.

South Korea has been seeking flexibility in its policies toward the North to try to improve relations that have been especially strained since the North’s two deadly attacks on the South last year.

Despite the South’s softer stance, North Korea recently threatened to turn the Blue House into “a sea of fire” in response to South Korea’s military maneuvers near the tense western sea border.

South Korea donated $20 million for humanitarian projects in North Korea through Unicef between 1996 and 2009.

Last month, the South also resumed some $6.94 million worth of medical aid to the impoverished communist country through the World Health Organization.

North Korea is one of the poorest countries in the world. It is believed to have suffered a famine that killed up to 2 million people in the mid-1990s. The North has since heavily depended on international handouts to feed its 24 million people.

Separately, South Korea also decided to give 2.7 billion won ($2.3 million) to a foundation to help build emergency medical facilities in an industrial complex in the North Korean border city of Kaesong.

More than 47,000 North Koreans work at about 120 South Korean firms operating in the industrial zone to produce clothes, utensils, watches and other goods.

The project serves as a legitimate cash cow for North Korea.