Summit for Lee with North is not priority, says Yu

Summit for Lee with North is not priority, says Yu 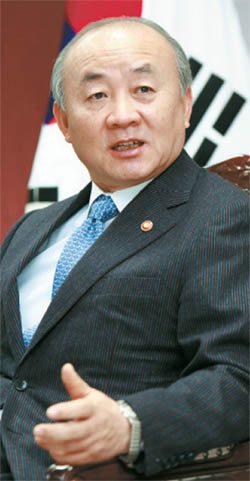 Unification Minister Yu Woo-ik has an exclusive interview with the JoongAng Ilbo on Monday. By Kang Jung-hyun

An inter-Korean summit is not a priority for the Lee Myung-bak administration during its remaining 15 months, but the creation of a stable inter-Korean dialogue channel is, according to Seoul’s chief inter-Korean policy maker yesterday.

In an exclusive interview with the JoongAng Ilbo, Unification Minister Yu Woo-ik put aside speculation that Lee may scramble to have a summit as a legacy, something that predecessors Kim Dae-jung and Roh Moo-hyun did in 2000 and 2006.

Yu said the current situation is not ripe for a summit. The most important job at hand is to get a high-profile dialogue channel between the two Koreas, he said.

The inter-Korean relationship turned cold since the conservative Lee administration took power in 2008, and reached its lowest point in decades after two deadly attacks on the South last year and Seoul’s punitive reactions.

The leadership in the North is thought to be waiting for a shift in power in the South after the presidential election in December next year, but Yu said that is not wise.

“There is no guarantee that the next government will be an easier partner to talk with than the Lee Myung-bak administration or the diplomatic environment then will become better than now,” Yu said.

He said the North would have to wait more than two and half years to check itself whether the wait is worthwhile. A little less than 15 months are left in Lee’s term and it will take around one and a half years for the North Korea policies of a new government to take shape.

“Isn’t that too long to wait?” Yu asked. “The pace at which the world changes now is much faster than the 1970s and 1980s. We have to look at what Libya, Tunisia and Egypt were like two and half years ago.”

Taking office four months ago, Yu, former ambassador to China, pledged to soften the hardline policies of his predecessor Hyun In-taek with elements of flexibility.

Under his direction, a series of measures including the resumption of aid through Unicef announced yesterday were taken.

The North, however, has scornfully responded to his rhetoric of flexibility - with more harsh words in recent days - saying that the flexibility has not been felt on its part.

Yu said such a reaction was regrettable but said the South will not respond to it.

In his term, Yu said he would like to deliver humanitarian assistance to North Koreans in need, particularly the pregnant, children and tuberculosis patients, even if North Korea is not impressed by those actions.

He said he has not decided on the breadth and depth of his flexibility, but he said it will reach its limit when “North Korea moves toward straining South-Korea relations.”

“If that situation comes, as minister, I would be very sorry,” he said.

He said his flexibility is also meant to give space to the North over the South’s demand for apologies for the sinking of South Korean warship Cheonan in March 2010 and the shelling of Yeonpyeong Island in November 2010. A total of 50 South Koreans, including two civilians, were killed in the attacks. The North denies its role in the Cheonan sinking while claiming the shelling was self-defense. Yu said the apology was not negotiable. But he stressed the purpose of an apology is not to humiliate the North or get compensation from it, but to clear the mess and move beyond for joint prosperity.

“On that basis, we will be able to have big cooperation,” he said.

During the interview, Yu also disclosed his once close relationship with the family of Oh Kil-nam, a former South Korean defector to the North who is at the center of a growing public campaign in the South regarding abductees and other people held in the North.

In 1986, Oh escaped to South Korea while he was on an overseas mission in 1986. His wife Shin Suk-ja is reportedly in prison in the North with the couple’s two daughters.

“I knew them in the late 1970s when I studied in Germany and I have deep sympathy for them,” he said. “We plan to launch a pan-government committee within this year to deal with not just the issue of Shin and her daughters but the overall issue of abducted people and POWs.”