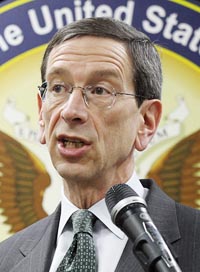 Washington’s point man on North Korean and Iranian sanctions urged Seoul yesterday to join the United States in putting stronger pressure on Iran for its recently reported progress on its nuclear program.

Although Robert Einhorn, the U.S. State Department’s special adviser for nonproliferation and arms control, came short of demanding an immediate ban on the importation of Iranian crude oil, observers say the U.S. call could lead Seoul to worsen its already sour relations with Iran.

“The United States is reaching out to our friends around the world to join us in sending a strong message [against Iran], and naturally, we look to the ROK to be with us in sending a unified, clear signal,” said Einhorn at a hurriedly arranged media briefing in Seoul.

The United States announced a series of additional financial and industrial sanctions against Iran on Nov. 21, including its oil industry, two weeks after a report by the International Atomic Energy Agency concluded that Iran has continued pursuing its nuclear weapons program.

“The situation in Iran is getting more and more worrisome; the timeline for Iran’s nuclear program is beginning to get shorter,” Einhorn said.

Last year, the United States had also requested that its allies, including Korea, ratchet up sanctions against Iran over its suspected nuclear program. Korea placed sanctions in September of that year, including the suspension of the Seoul branch of Iran’s Bank Mellat for two months through last December.

Iran, the world’s third-largest crude oil exporter, is one of Korea’s biggest trade partners in the Middle East. In particular, Korea depended on Iran for more than 8 percent of its total crude oil last year.

Einhorn said reducing imports of Iranian crude oil was not among the possible sanctions Washington sought from its allies this time, saying that the United States was “very conscious of the energy security needs of countries like Korea” and did not want “to interfere with their energy security needs.”

But, he added that the United States hoped to see reduction in Iran’s revenue from its sales of crude oil and see countries reduce imports of Iranian crude oil by large quantities.

Einhorn was also in Korea for a fourth round of negotiations of the Korea-U.S. nuclear cooperation treaty, slated for today. The treaty on industrial usage of nuclear materials is to expire in 2014, and the two sides began negotiations to revise the treaty at the end of last year.