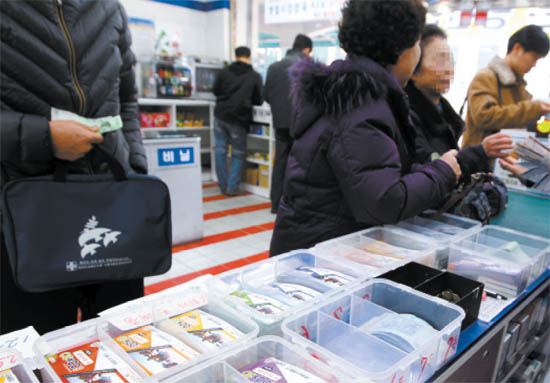 A passerby buys a lottery ticket at a small store in Sanggye-dong, northern Seoul, yesterday. An increasing number of Koreans are turning to lotteries as their economic jitters grow. [YONHAP]


After work, Lee Seong-moo, a 30-year-old company worker, often visits a small lottery counter near his office in central Seoul.

Lee’s turned off by mutual funds and stocks in this time of global financial jitters. He prefers to buy a Lotto ticket, for 1,000 won each.

“The overall economy is facing uncertain times and I could be affected in the years to come after marriage,” he said. “I buy lotteries just in case. Who knows? I might win someday!”

Lee’s got plenty of company in his lottery finger-crossing. While Korea’s economy remains vulnerable to external shocks stemming from the euro zone debt crisis and a global recession, an increasing number of people are turning to lotteries for a “You never know” stab at prosperity.

According to data released yesterday by the Korea Lottery Commission, under the Ministry of Strategy and Finance, lottery sales reached 2.79 trillion won ($2.5 billion) over the first 11 months of this year, up 21 percent from 2.3 trillion won over the same period last year.

The increase, according to the commission, is because of growing uncertainty about the economy as well as the rising popularity of Pension Lottery 520 launched in July.

The pension lottery offers winners a stipend of five million won every month for 20 years - before taxes - instead of the lump sum of the regular lottery.

With such pace, this year’s total lottery sales are expected to reach 3.1 trillion won, exceeding a 2.8 trillion won ceiling imposed by the National Gaming Control Commission, which is under the Prime Minister’s Office. The commission is in charge of regulating the country’s gaming industries, such as lotteries, horse racing and casinos. If the betting exceeds the limit, that will be a first since the controlling commission started operation in 2009. If the ceiling is breached, the commission could lower the maximum sales figure for the following year.

Worried that excessive lottery playing would lead to gambling addictions, the National Gaming Control Commission recently recommended that the Finance Ministry put some restraints on lottery sales by the end of this year by cutting the number of lottery tickets or suspending sales until the end of the year.

The Finance Ministry, however, is against such a move, as “doing so would raise complaints from lottery buyers as well as lottery sales outlets nationwide.”

“Suspending lottery sales would hurt sales of lottery stores that are mostly run by independent businessmen,” said an official from the ministry. There are around 18,000 lottery stores in Korea.

“We considered issuing lotteries on a biweekly basis instead of weekly and limiting the sales hours, but realistically, that’s impossible,” the official said.

Putting a limit on lottery sales would also mean a cut in the government’s revenue from them.

After the global financial crisis broke out following the collapse of Lehman Brothers in late 2008, in the first quarter of the following year, lottery ticket purchases jumped 12 percent from the previous year, according to the Finance Ministry.