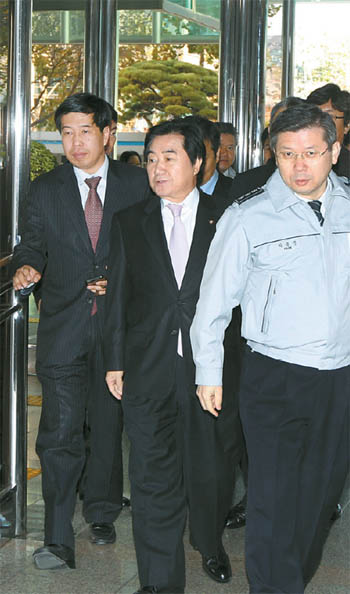 Members of the Democratic Party’s special committee investigating the cyberattack visit the National Police Agency yesterday to demand a thorough investigation into the politically high-profile case. By Byun Sun-goo

Democratic Party members ratcheted up pressure on the police and the ruling party to get to the bottom of the Oct. 26 cyberattack on the election watchdog’s Web site, arguing that the party must have engineered the dirty trick to help boost its chances of winning the by-election that day.

“Considering the alleged purpose and scale of the crime, we can’t easily agree to police’s assumption that it was committed by a ninth-level aide alone,” DP Chairman Sohn Hak-kyu told party members yesterday.

“If the government tries to conceal or downsize the case,” he said, “we will take action to figure out the truth by launching a parliamentary inspection or an investigation by special prosecutors.”

The ruling Grand National Party has found itself embroiled in a massive scandal after police arrested Representative Choi Ku-sik’s 27-year-old chauffeur on suspicion of orchestrating a large-scale distributed denial-of-service (DDoS) attack against the National Election Commission’s Web site on Oct. 26, the day of a mayoral by-election in Seoul.

At the time, Choi was in charge of promoting the party’s mayoral candidate through social networking services, prompting suspicions he and other members of the party must have been involved in the attack. His chauffeur, surnamed Gong, is a ninth-level civil servant.

Allegedly, Gong, a hacker friend and two others paralyzed the commission’s Web site to prevent young voters from finding their polling stations. Analysts had predicted a low voter turnout would be to the advantage of the ruling GNP.

Members of the DP’s special committee investigating the cyberattack yesterday visited the National Police Agency and demanded the opening of the sites log files of the attack on the day.

The lawmakers told police they found that the driver had cellphone conversations with the hacker friend more than 30 times on the eve of the election day and also with unidentified people about 20 times. They said the unidentified people must have been ruling party members.

They also said rumors were spreading that the hackers only attacked the Web page that had information on the location of polling stations, not the entire Web site of National Election Commission, and demanded to see the logs to prove the rumor. The DP lawmakers will launch a parliamentary investigation into the case if unsatisfied with police investigation, they said.

Police refused to open the Web site logs or reveal what they found in raids of the home and office of the hacker friend.

National Police Agency Commissioner Cho Hyun-oh told DP lawmakers yesterday, “We will rigorously investigate the case regardless of the social status and political ideology of suspects.”

GNP members are agonizing over the opposition’s demand to hold a parliamentary investigation, which could hurt them in April’s legislative election. Local media reported that most GNP lawmakers want to postpone any parliamentary probe until the police investigation is complete.

Representative Choi expressed his intention to step down as head of the GNP’s public affairs office in a phone call with high-level members on Sunday. The party accepted it.