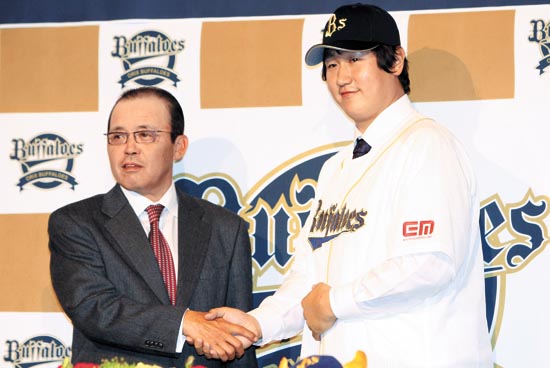 
Korean slugger Lee Dae-ho said yesterday he decided to play in the Nippon Professional Baseball (NPB) league because he wants to show top Korean players can succeed in Japan, announcing his signing with the Orix Buffaloes.

In a press conference held in his hometown Busan, Lee officially confirmed that he signed a two-year contract that is worth of 760 million yen ($9.7 million).

The Giants offered Lee a four-year contract worth 10 billion won ($8.8 million), but he said he rejected the offer because he wanted a challenge at a higher level.

“I’ve never thought I would play baseball for a different club than the Giants,” Lee said at the press conference that was attended by Orix manager Akinobu Okada and general manager Yoshio Murayama. “But as a man, I thought I need a challenge for myself and this was the time.”

Lee, a power batter listed at 194 centimeters (6 feet 5 inches) and 130 kilograms (286 pounds), was last year’s KBO MVP after dominating seven of the eight offensive categories, including homeruns, runs batted in (RBI) and batting average. The only title he missed that year was stolen bases.

“I wanted to show top Korean players can also do well in Japan,” Lee said. “I will show a heart-moving performance with fans’ support.”

Lee will be the 13th Korean ever to play in the NPB league and the sixth batter after Lee Jong-beom, Lee Seung-yeop, Lee Byung-kyu, Kim Tae-kyun and Lee Bum-ho. Currently, Tokyo Yakult Swallows closer Lim Chang-yong is the only Korean playing in NPB.

“I think you are just running away if you are afraid that some players have shown weak performance there,” Lee said.