Novelist speaks about move to go off the grid

Novelist speaks about move to go off the grid 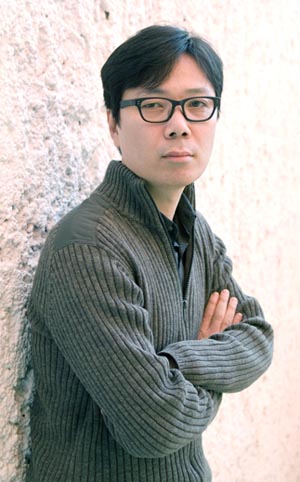 GUADALAJARA, Mexico - Novelist Kim Young-ha appeared at the Guadalajara International Book Fair, the most important publishing gathering in Ibero-America held in Mexico on Nov. 28. Kim, 43, had just arrived from his current residence in Manhattan, New York, to attend an event introducing Korean literature held by the Korea Literature Translation Institute.

This February, Kim suddenly shut down both his Twitter and blog accounts, refraining from press interviews and official appearances. After almost 10 months, Kim opened up about his feelings and reasons for his “disappearance,” along with his recent condition.

The cessation of Kim’s Twitter and blog was in relation to the dispute over the death of screenwriter Choi Go-eun. She died from chronic illness in extreme poverty early this year, shocking the public and triggering not only sympathy but also fierce controversy over social welfare support for artists.

Choi was Kim’s student at the Korea National University of Arts. Kim said on his Web site that artists need to endure a certain amount of destitution. He also pointed out that Choi’s death was not due to malnutrition from starvation, as some news reports claimed, but was actually from a chronic illness of hyperthyroidism. Opposing Kim’s position, literary critic Cho Young-il claimed that the country needed a social welfare system for artists.

Kim seemed to be upset about what he called “sensational” reports, even if they were sympathetic toward Choi, that he said made her look like a pathetic figure. He emphasized Choi did her best to survive before she lost all her energy because of the disease. Still, as Kim’s opinion that artists should tolerate a certain amount of destitution themselves was portrayed as being relatively cold-hearted, controversy spread online. That was when Kim blamed himself and renounced the Internet. Here is in an interview with Kim from the Guadalajara International Book Fair.


Q. How are you doing these days?
A. I either stay home [in New York] or visit the Columbia University library to read or write novels. There are times when nobody calls, even to ask for a simple “How are you?” I don’t meet with a lot of people either nowadays. It may be because of the lack of social relationships, but there aren’t many exciting events in my daily life these days. Living abroad, I feel a sense of stuffiness. When I was in Korea, I thought people liked me. Now I have realized that all they want from me is just to write a decent novel.

Is your novel writing going well?

I live on the eighth floor of an apartment in Manhattan. When the weather is nice, it feels like walking on a great big cloud and I cannot concentrate on writing. When this happens, I close the curtains to screen the sun and rely on my iPhone application that turns on the sound of rain. It puts me in a moderately melancholy mood that helps me write better.

You have closed down your blog account. Was the online controversy early this year a big shock?

In a sense I noticed that I had been a sharp spoon all this while - that I cannot fully understand the mind and emotion of others, and that I may be clumsy in expressing my own thoughts when putting them into words, despite the fact that I am a writer. I think what the people wanted from me [during the controversy over Choi’s death] was a consolation on the death of an artist, not a realistic solution.

There must be parts that were misunderstood due to the short comings of the Internet, right?

I don’t necessarily think the situation was skewed because of the Internet. No matter what happens, I realized that the only place a writer could return to is to the novel itself. After passing 40, I knew that all was left for me was writing novels. I’ve even given up having children to focus on writing. In Korea, I quit positions such as professor at the Korea National University of Arts and radio DJ all to simplify my life for writing. I want to write novels that can be easily read and have literary meaning.

Is there anything that you are writing now?

I have finished the draft of a historical novel dealing with a court tragedy. The book will be published around next February. At the moment, I am writing a full-length novel on the horrendous world of teens these days.