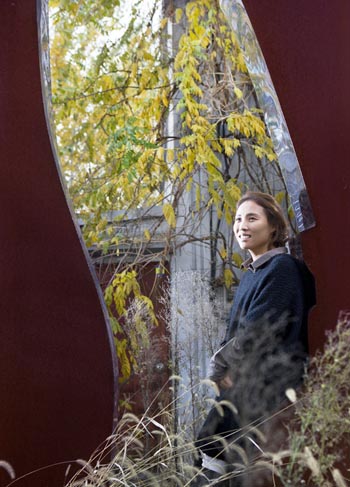 Hwang Ji-hae will display her second work at the 2012 Chelsea Flower Show in London in May. The piece, “Quiet Time: DMZ Forbidden Garden,” was created as a tribute to veterans of the Korean War. By Park Sang-moon

GWANGJU - Garden designer Hwang Ji-hae was thrust into the spotlight in June when she won the best garden award at the Chelsea Flower Show in the artisan garden category for a traditional yet unconventional Korean garden. Next spring, the Gwangju-based artist will return to the show with a garden that reflects on the tragedy of the Korean War and pays tribute to its veterans.

“Ultimately, it’s going to be a symbolic place honoring everyone who suffered because of the war,” said Hwang, who was the first Korean to have an exhibit at the show.

In the work titled “Quiet Time: DMZ Forbidden Garden,” Hwang will incorporate letters from English veterans of the war that she met while in London as well as plants indigenous to Korea and physical representations of objects from the DMZ symbolizing the division between North and South.

The garden will be on display at the 2012 Chelsea Flower Show, which is in London from May 22 to 30, and she is currently seeking sponsorship for the work.

Her award-winning garden from this year’s show, titled “Hae-woo-so,” was also inspired by Korean culture and had as its centerpiece a traditional outhouse surrounded by a lush collection of flowers and plants.

The Korea JoongAng Daily met with the artist last Thursday in Gwangju at her Gallery M:um, to talk about the new garden and her work as an artist. 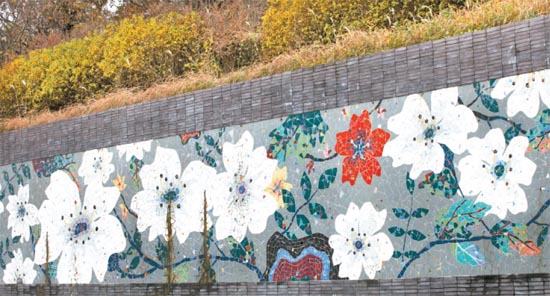 Hwang contributed to this work for the entrance to the May 18th National Cemetery in Gwangju, which commemorates victims of the 1961 Gwangju Democratization Movement.


Q. What prompted you to create this garden?

Last year, I had a chance to go to a forum honoring English veterans of the Korean War as part of events commemorating the war’s 60th anniversary. The veterans may have received thank-you notes or badges for their service, but I wasn’t sure if they knew how truly thankful Koreans were for their sacrifice. The war didn’t start because of us, but the powers of the world collided here. And regardless of the political consequences, lives were lost.

What will we see in your garden?

Some of the veterans I spoke with talked about plants and flowers they saw in Korea during wartime, and they asked me to find them. There are six plants that are indigenous to the area near the DMZ, including Geumgang chorong [a type of bellflower], and they will all be part of the garden I’m creating.

This is my way of thanking the veterans. The DMZ is a place where they went through traumatic experiences and it’s hard for them to open up about what they witnessed there. But they will be sharing those unspoken memories in letters that I’ll put into the garden. Ultimately, it’s going to be a symbolic place honoring everyone who suffered because of the war.

Why were you drawn to the DMZ?

If I had to choose the most beautiful garden on the planet, I would choose the DMZ. Of course there are beautiful gardens all over the world, and even some environments that are still relatively untouched by humans, but the DMZ was formed organically after a major upheaval. It was created because of the war but is now a symbol of peace.

You will be using plants indigenous to Korea. How will you get them to London?

The plants need to be moved to London at least three months before the show so they can adjust to the local climate. Since local soil cannot be shipped out of the country, the plants will be planted in artificial soil and then shipped to London. In the worst case scenario, if none of the plants survive, I will consider having some plants shipped from Korea to London on the day of the show. 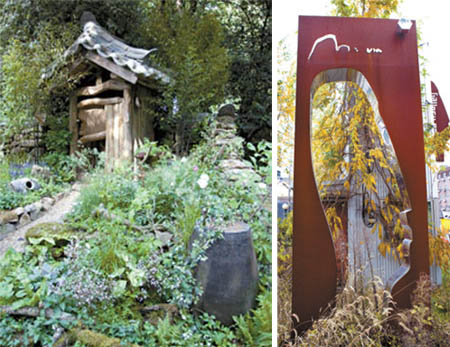 Left: Hwang Ji-hae won the best artisan garden award at this year’s Chelsea Flower Show with “Hae-woo-so,” the centerpiece of which was a traditional Korean outhouse. Provided by the artist
Right: A sign stands in front of Hwang’s Gallery M:um in Gwangju. By Park Sang-moon


Why have you continued your gardening projects in London instead of Korea?

How would you characterize the Korean gardening style?

The Korean style of gardening is characterized by nonchalance. Some might say that a Korean garden looks abandoned or undecorated, but it’s a way to keep the garden’s unpolished inner beauty.

When you create a garden, do you try to decorate it at all?

No, I never try to decorate deliberately. First, I decide if the garden is for the people who live with it or for visitors. That affects how I approach the overall structure. When creating a garden, it’s not a human being’s job to decide where certain plants are going to be. It is nature itself that draws the pictures in a garden. What I can do as an artist is make some space for nature to paint the space freely.

How do you see your role as an artist?

What I do is create a big picture, as I said. Let’s say I’m painting a mural. In that case, I’m doing more than just painting on a wall. I need to consider what’s surrounding that wall. In the process, I start wishing I could choose which wall to paint. And given the choice, I would want to choose where the wall stands with a natural environment that matches the idea I have in my head.

I think living things add something that man-made things never can. So as the plants or trees grow around that wall, they naturally deliver something more profound that I, the artist, who chose to paint the mural there, never thought about. That’s the fun part about art - its unpredictability. And these art pieces, outdoor structures, for example, were placed in locations where nature used to be. So artwork should always defer to nature and work in harmony with nature without damaging it.

Both of your entries in the Chelsea Flower Show were inspired by Korean culture. Will you continue to focus on Korea in future projects?

I wasn’t a hardcore patriot before I left Korea. After arriving in London, I realized that there is a competition for attention among cultures going on everywhere, so I started raising awareness about Korean culture. I think one of the reasons I won the show this year was because my work was very Korean, which not many people in Europe had seen before. Of course, I also got credit for turning an outdoor toilet into a garden, but the whole concept was based in Korean culture, which was new and fresh to them. The people at the show thanked me for bringing diversity to the show.

Whenever I’ve met garden design experts in Europe, they’ve all said they don’t know any artisan gardeners from Korea. Korea’s rapid development focused the international community’s attention on dynamic fields such as sports or film that are prospering in Korea rather than on static ones. For example, Korea may be known among economists for rapid economic growth or among football fans who know that Park Ji-sung plays for Manchester United. Or people might know Korean movies that won awards at the Cannes Film Festival.

It seems there isn’t much awareness about your work in Korea. Is that what made it difficult for you to find a sponsor for the upcoming show?

I think that’s what it is. The Chelsea Flower Show is a big deal in London, and it gets a lot of media attention worldwide. I think that participation in the show would be worth tens of billions of won in advertising, but Korean businesses still aren’t aware of what a big impact they could have through the show.

I’d like to enter my work into the Chaumont Garden Festival and try something more experimental. And I will continue to create gardens inspired by Korean culture.

Major projects
* Selected to exhibit her work “Quiet Time: DMZ Forbidden Garden” at the 2012 Chelsea Flower Show in the show garden section
* Contributed to the artwork at the main entrance of the May 18th National Cemetery in Gwangju
* Owns and manages Gallery M:um in Gwangju