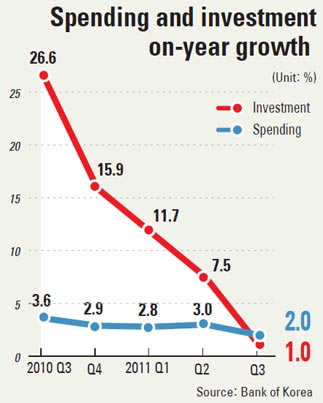 Fears of another global recession are already affecting the domestic market as consumers tighten their purse strings on durable goods like automobiles, while companies scale back their investments on existing and new production lines.

According to a revised third quarter report released by the Bank of Korea yesterday, consumer spending grew 2 percent from one year ago. This represents the lowest on-year growth since spending edged up 0.4 percent in the third quarter of 2009.

The figure for the latest quarter also marks a retreat from the previous quarter, which grew 3 percent in annualized terms.

Workers were also shown to be saving less, 31 percent of their income on average, down 0.3 percentage points from the previous quarter. The rate has not been this low since the fourth quarter of 2009.

The central bank cited high inflation as the main cause of the spike in total spending compared to disposable income.

The central bank said that although investments in telecommunications, broadcast equipment and the automotive industry grew on-year, less money was being pumped into shipbuilding and semiconductor manufacturing equipment.

“The domestic market started to slow overall in the third quarter, which is retarding economic growth,” said Jung Young-tae, director of the BOK’s national accounts office.

“Consumer spending continued to fall as households don’t have much to spend due to shrinking incomes and rising levels of household debt,” Jung added.

The banker said facility investment grew in part because Korea purchased three A380 aircraft while its broadcasters snapped up expensive technological equipment ahead of the launch of four new TV channels.

But he noted that many companies are cutting back on their investments which could bode ill for the quarter ending this month.

Yesterday’s report also revealed that the nation’s gross national income (GNI) grew a healthy 0.8 percent from a year earlier in the third quarter, compared to annualized growth of 0.2 percent in Q2. This is the highest rise since mid-2010, when it expanded by 1.3 percent on-year. The GNI measures the actual purchasing power of the population.

However, the central bank said the GNI upswing was largely due to a reduction in the trade deficit and a drop in the price of international crude oil, rather than a surge in exports, meaning Korea is on a slow recovery track.

Additionally, GDP grew 3.5 percent in the quarter, a slight improvement from the 3.4 percent growth initially reported in late October but showing barely any change from the previous quarter.

The report was released amid fears that the global economic outlook is about to worsen. Standard & Poor’s on Monday warned of an unprecedented mass credit rating downgrade for European countries.

The global credit ratings company said that the “systemic stresses” that have arisen in the euro zone in recent weeks are bringing the prospect of downgrades for Germany and France, the zone’s two biggest economies, closer to fruition.

Among the 17 euro zone members, 15 have been placed on credit watch, including countries formerly seen as immune to the crisis such as the two aforementioned and the Netherlands.

The Organization for Economic Cooperation and Development recently lowered Korea’s outlook to 3.7 percent from 4.6 percent for 2011. It downwardly revised its projection for next year by a similar level, to 3.8 percent from 4.5 percent.