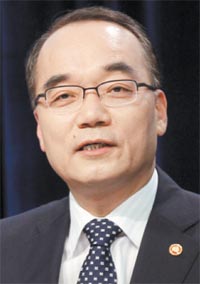 Minister of Strategy and Finance Bahk Jae-wan cautioned yesterday that the nation’s growth may slow, hurt by a possible global recession and subsequent trade contraction.

“As the global economy is showing signs of slipping into a recession and trade becomes contracted, there are worries about the domestic economy suffering a slowdown,” Bahk said at a meeting with other senior policy makers.

“We need to prepare for a possible long-term growth slowdown by enhancing our economic fundamentals through advancement of the service sector and the nurturing of new growth engines, while actively seeking to expand our economic territory [overseas],” he added.

Bahk described the nation’s economic situation as being in a “crisis,” and emphasized the need to minimize market volatility while keeping other risk factors under control.

His concerns about the economy augment the government’s stepped-up preparations against what it sees as heightened global uncertainties and their impact on the nation’s export-dependent growth.

Earlier, the Finance Ministry said in its monthly economic report that external uncertainties remain high as the euro zone crisis deepens and with the global economy potentially taking another hammering.

Bahk said the problems undermining the euro zone seem to be developing into a “global trust crisis.”

Matters could further deteriorate next year ahead of major elections in some advanced nations, he added.

He said it was lamentable that global policy responses have failed to catch up with fast-changing market situations due to complicated and vested interests among nations, governments and political parties.

“Currently, polices have failed to earn the market’s trust,” Bahk said. “We should bear in mind that the most important quality of leadership is trust, and we should make all-out efforts to secure the trust of the market.”