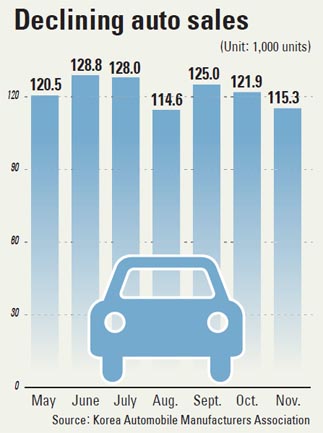 From department stores to car dealerships, the impact of an economic slowdown is being felt across the nation as consumers tighten their belts to prepare for stormy seas ahead.

Retail and auto sales have been lackluster in recent months, and there are visible signs of declining consumption for big-ticket items and ordinary household goods despite a raft of end-of-year sales and promotions.

Sales at major department stores in the country climbed between 1 percent and 3 percent last month.

This is a huge contrast considering that they enjoyed over 20 percent on-year increases in the first half of this year.

Lotte saw its sales inch up by 1.2 percent in the same month, while Hyundai’s revenue rose 2.1 percent. Shinsegae fared better with a 3.2 percent increase.

According to Shinsegae, even shoppers with deep pockets are taking a more prudent approach to spending. The average sum forked out by the retail chain’s 20 top-spending customers last month fell 10 percent from one year ago to 1,080,000 won ($955), it said.

Fur sales plunged 8.9 percent from a year ago, while demand for men’s and women’s clothing, sportswear and golf equipment all dropped over the same period, it added.

Even discount stores are experiencing a pinch, with sales of clothing and electronics weakening beyond expectation.

E-Mart, the country’s leading discount store chain, said its sales increased by just 1.9 percent despite the advent of the festive season, the smallest monthly gain it has seen all year.

Homeplus and Lotte Mart found themselves in a similar boat, posting sales growth of 3.1 percent and 3.4 percent, respectively, for their stingiest monthly gains of 2011.

E-Mart said its sales of clothing and miscellaneous goods fell 2.9 percent, while Lotte Mart experienced a 2.1 percent drop in the same product category.

“As the economy is expected to get worse, consumers are cutting their expenditures.”

According to the Ministry of Knowledge Economy, sales at department stores jumped 24 percent on-year in January and 15 percent in April.

Between May and August, annual sales increases hovered between 5 percent and 8 percent before slowing to 3.1 percent in October.

“Export growth started losing steam in the second half, and this is negatively affecting income levels,” said Lee Geun-tae, an economist at LG Economic Research Institute.

“Consumers are refraining from making purchases of goods they deem unnecessary.”

Lee said the situation will deteriorate next year as there seems to be no quick fix for the economic uncertainty riddling the euro zone.

“But as consumption contracts, inflationary pressure is going to ease,” he added.

Auto sales also declined for the second month in November.

For Hyundai Motor, the country’s leading automaker, this marked the third consecutive month of bad news. Its sales dropped 9.3 percent from a year ago, led by waning demand for its Avante compact sedan and Sonata mid-size sedan, which saw sales drop by 37.2 percent and 37.1 percent, respectively.

Kia Motors, GM Korea, Renault Samsung Motors and Ssangyong Motor all saw their sales fall from a year ago.

“Purchasing power is falling because of the slowing economy and increases in household debt,” said Park Hong-jae, director of the Korea Automobile Research Institute.

“We expect to see auto sales decline 1.1 percent next year.”