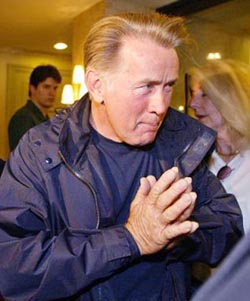 NEW YORK - Martin Sheen is shining a spotlight on a New York prisoner’s efforts to get his 1999 murder conviction thrown out.

The actor joined a Manhattan news conference Monday after meeting with inmate Jon-Adrian Velazquez at a suburban prison. Sheen says he believes Velazquez is innocent. He says “the case cries out for justice.’’ Sheen called his meeting with Velazquez inspirational.

Velazquez was convicted of fatally shooting retired police officer Albert Ward in an underground betting parlor in 1998. Velazquez’s lawyers say two key eyewitnesses have since recanted their identifications of him as the killer in a case with no physical evidence.