For Koreans, 2G mobile phone service is so 1990s

For Koreans, 2G mobile phone service is so 1990s 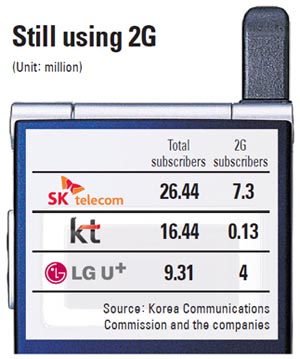 Midnight tonight could be a historic moment in Korea’s mobile industry: 2G phone service may start to become a thing of the past.

KT, Korea’s No. 1 fixed-line service operator and No. 2 mobile carrier, plans to shut down its second-generation mobile network at midnight tonight.

The phone service that most people joined the mobile era with - and which most consumers in the United States and other developed countries continue to use - will start to be wound down in Korea.

But there could be a last-minute crossed wire: a court challenge from consumers still happy with their old, not-very-smart phones, which should be decided today.

If the challenge fails, KT will be the first mobile carrier in Korea to ditch 2G. SK Telecom and LG U+ - the No. 1 and No. 3 mobile carriers - still operate 2G service and haven’t announced plans to ditch it.

Globally, KT is one of a small handful of mobile carriers to do away with 2G service.

KT has been waiting for this day for months.

The commission had rejected KT’s previous requests in April and July, saying the company’s number of 2G users was too large to end the service.

The KCC approved the plan last month because the company successfully reduced its number of 2G users to below 150,000, less than 1 percent of its wireless subscribers. As of yesterday, KT said that number has decreased to 130,000.

But on Nov. 30, about 1,000 2G customers filed a class action suit against the KCC to nullify the regulator’s approval. The ruling is due tomorrow in a local court.

Choi Soo-jin, a laywer at Jang Baek, a law firm in southern Seoul that is representing the customers, says KT not only used “illegal means” to reduce the number of its 2G users, but also never notified them of the planned shutdown timeline and the KCC should be held accountable for overlooking such unlawful activities.

“The law stipulates that the company should notify the users of its planned shutdown of a service 60 days ahead, but not once since early this year did KT inform users of its Dec. 8 shutdown plans,” Choi said.

She said KT gave inconsistent instructions on what 2G users should do when the service stopped, and failed to hold hearings on the plans, which is mandatory according to Korean laws.

If the lawsuit fails, KT will walk away from 2G and run full throttle toward 4G services.

KT’s rivals - SK Telecom and LG U+ - launched commercial 4G services in July of this year, so KT has a lot of catching up to do.

The company plans to invest 1.3 trillion won ($1.13 billion) through 2012 to prepare for the LTE service, it said in a statement released following the regulator’s decision.

Short for long-term evolution, LTE is a type of 4G wireless communications technology that mobile carriers worldwide are betting on for the future.