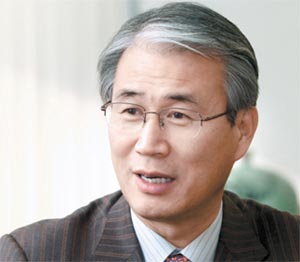 The time has come for Korea’s political parties to redefine their values and identities to prevent an era of ochlocracy, or government by mob rule, National Assembly Secretary General Kwon Oh-eul said this week, sending a word of warning to politicians as public disappointment over conventional, business-as-usual politics continues to grow.

Kwon, a 54-year-old former lawmaker with three terms under his belt, has been working as the National Assembly’s secretary general since June 2010. During his interview with the Korea JoongAng Daily in his office at the National Assembly, Kwon openly criticized the major political parties for what he called their lack of identity and core values.

The recent rise of politicians with no party affiliations and the growing sense of public fatigue toward conventional party politics are to be expected because the parties have failed to win people over due to their lack of principles, Kwon said.

“In Korea, we see no political parties, just splinter groups,” Kwon said. “A political party is formed by a group of people who work together to achieve goals through their shared values. In that sense, the Democratic Labor Party represents laborers and farmers, although it may not be a popular party, but the Grand National Party and the Democratic Party are just staying together to fare better at elections.”

“Political parties and groups need to reform with redefined identities and values,” he said. “Or the lawmakers must regroup to represent the interests of specific groups. The major parties talk about everything, from the working-class to the nation’s wealthy elite, but they need to clarify their main agendas and policies.”

While reforming the system for nominating legislative candidates remains a tough challenge, Kwon said the current method of choosing candidates through the party’s in-house nomination committee, considered highly advantageous for incumbent lawmakers, should be changed to better reflect public opinion.

To make the process fairer, he said different standards should be used to evaluate incumbent lawmakers that are seeking re-election, as well as new faces. “But I am against using opinion polls to select candidates,” he said. “That is just a popularity contest [with scant regard for policy].”

Kwon said the parties should no longer attempt to represent a broad cross-spectrum of society, but rather target specific interest groups. “Voters should cast their ballot based on their individual interest,” he said. “Only then will the political parties find their identities and sense of direction. At some point, there will be a balance of power.”

While welfare pledges have long been reserved for liberals, Kwon, a self-proclaimed conservative, said that improving welfare programs is crucial for Korea’s national security. “It is inappropriate to describe welfare pledges as mere populism, because our welfare programs are still below the OECD level,” he said. “What we need is more consistency in terms of policy direction.”

He said Korea’s conservative groups have become riddled with vested interests, and have too often failed to step up to the plate to accept responsibility for social, economic or other ills. He added that the changing times have made welfare a top priority. “Twenty or 30 years ago, national security meant protecting the country from North Korea and outside forces. But today, that national security is protecting our values and maintaining order in society. To this end, welfare is the key. Unless the people feel some improvement in their lives, these changes have no meaning. If meaningless changes continue to occur, the country will sink. That’s why I say the greatest welfare is the strongest national security.”

Kwon also talked about a series of embarrassing incidents in the National Assembly, particularly the way in which the Korea-U.S. free trade agreement was ratified last month. The long-pending trade deal was railroaded through by the GNP in a chaotic session marred by DLP Representative Kim Sun-dong’s tear-gas attack.

While the legislature did not take any action against Kim, the prosecution has begun an investigation into the incident after conservative civic groups filed a complaint. National Assembly Speaker Park Hee-tae said on Friday that the legislature has no plan to lodge its own complaint.

“Frankly speaking, the case was not handled properly,” Kwon said. “I feel extremely disappointed that no action was taken by the legislature or any political parties. Unless we draw a clear line, similar episodes will be repeated.”

Kwon said the tradition of resorting to violence relates to the nation’s history of enduring dictatorships. “Back then, lawmakers had no choice but to use physical force,” he said. “And this was to a certain degree supported by the public. But we are now living in a democratic society, and the time has come for the minority to stop using force to block the majority.”

With so many fresh faces in the National Assembly, the political culture is slowly changing, but Kwon said that real reform lies in the hands of voters. “Obviously, the lawmakers must change [their ways], but voters should make the right decision [at elections] so that such embarrassing, obsolete behavior can be rooted out,” he said.

A native of Andong in North Gyeongang, Kwon said he will bid to represent his hometown once again at the legislative elections in April. “I have served the people of Andong for 12 years during my three terms,” Kwon said. “During my tenure as the National Assembly’s secretary general, I had a lot of time to reflect deeply on matters.”

Kwon said he wants to reshape policies to improve the lives of working-class people in Andong. “The GNP has been the party of the elite,” he said. “But I would like to represent the voices of ordinary people.”