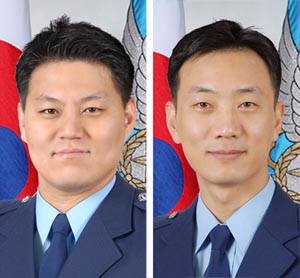 The Air Force is calling the two pilots killed Monday, when their training jet crashed shortly after take-off, heroes for avoiding a residential area and instead taking a longer route to crash in an empty lot adjacent to their base.

The T-59 aircraft, part of the 16th Fighter Wing based in Yecheon, North Gyeongsang, took off at 2:27 p.m. Monday before it went down to the left of the runway outside of the base, according to the Air Force.

That decision, the Air Force said, probably spared civilian casualties, as the jet could have crash landed to the right side of the runway, which is a residential area and would have been closer for the pilots. “We presume that the pilots turned head-on toward the empty lot on the left side of the base’s fence,” an Air Force spokesman said. “Because they went left, I don’t think they had enough time to escape the jet.”

The Air Force said that Major Kwon was found caught in the branch of a tree with his parachute, presumably after a failed attempt to eject because of their decision to direct their jet toward the empty lot. The Air Force has formed a special committee to investigate the crash.

Following the deadly incident, the Air Force grounded all flights, except for emergencies, to inspect its aircraft.

“We’ve banned all flights until the inspection is complete,” the spokesman said. “We’ve also grounded all T-59s until the investigation is done.”

Major Kwon is survived by his wife, who is also a fighter jet pilot, and a three-year-old son. Major Park’s wife gave birth to their second daughter in November, but Park had yet to see the baby because of his military work.