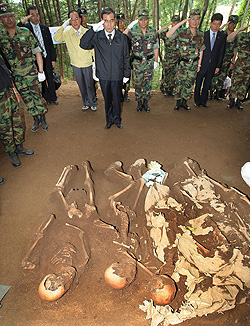 The Korean military will provide technological assistance on DNA identification to Libya to help identify victims of the civil war, according to Seoul officials yesterday.

Cho Dae-sik, Korea’s ambassador to Libya, said that the Agency for KIA Recovery and Identification of the Ministry of National Defense, which identifies remains, will provide know-how to help identify tens of thousands of Libyans killed in the six months of rebellion against the Muammar el-Qaddafi regime.

“Mustafa Abdul Jalil, the chairman of National Transitional Council, made an official request for the assistance of the Korean government for excavation and identification of those killed during the civil war,” Cho said. “Our government is positively reviewing a plan to provide technology and human resources for free.”

According to Defense Ministry officials, the NTC became aware of Korea’s DNA identification expertise after viewing a program on Al Jazeera aired four days before former Libyan leader Qaddafi was captured and killed.

“Many things remain to be discussed, such as how to transport equipment used for identification of the bodies, the number of experts to be sent and how to secure their safety,” an official of the Defense Ministry said.

According to an official of the Ministry of Foreign Affairs and Trade, the NTC may also have asked Hwang Woo-suk, a disgraced Korean expert on stem cell research, for assistance in excavation and identification.

“Qaddafi’s son, Mutassim, once entrusted Hwang with a biological project in an effort to find a next-generation growth engine for Libya,” the official said. “I heard that the new Libyan government is considering resuming Hwang’s project on a commercial basis if the Libyan economy gets going.”

He said the project Hwang was working on was also associated with DNA identification.

Hwang was evacuated from Libya on a chartered flight for Koreans in February at the start of the civil war. He said he had been working on “an incredibly big” project for the “highest authority” in Libya.