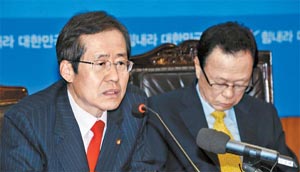 Police yesterday said that they will summon an aide to National Assembly Speaker Park Hee-tae to ask if he was involved in the Oct. 26 cyberattack on the National Election Commission’s Web site.

The police believe the aide met the alleged planner of the cyberattack, the chauffeur of another GNP representative, just hours before it took place on the day of the mayoral by-election in Seoul. The chauffeur is in police custody.

“On the eve of the by-election, Grand National Party Representative Choi Ku-sik’s chauffeur had drinks with five people including Park’s aide, before he allegedly planned the attack with hackers,” a National Police Agency official told media. “To figure out what they talked about that night, we will summon the aide soon for interrogation.”

Police said that the Speaker’s aide was a friend of the chauffeur, who is surnamed Gong, and he had previously worked for Choi.

Park’s aide tendered his resignation Monday saying he was afraid of hurting the speaker’s reputation by being interrogated.

Police have already questioned the other four people who were with Gong that night. All four said they discussed investment issues, not the cybercrime.

According to police, during the drinking session Gong allegedly called a hacker surnamed Gang, a friend from his hometown, and asked him to arrange the large-scale distributed denial-of-service (DDoS) attack that paralyzed the National Election Commission’s Web site for more than two hours on the morning of the by-election.

Allegedly, Gong, a hacker friend and two others paralyzed the commission’s Web site to prevent young voters from finding their polling stations. Analysts had predicted a low voter turnout would be to the advantage of the ruling GNP’s candidate.

The opposition Democratic Party refuses to believe that the chauffeur directed the attack without backing from the ruling party. But they have different scenarios on who was behind it.

While members of the DP’s investigative team looking into the attack are sure that the GNP orchestrated the attack, some lawmakers suspect that the NEC helped the hackers.

The DP’s Mun Yong-sik told two local radio programs yesterday that he couldn’t understand why the nation’s election watchdog let its Web site be paralyzed for more than two hours and said it seemed like an inside job.

As an owner of an IT company, Mun said he analyzed logs of Seoul Mayor Park Won-soon’s Web site, which was also attacked the same day, and that attack was very basic.

“Usually, the NEC’s system would monitor its Web site around the clock and an alarm would be sounded when a problem appears,” Mun said. “It takes about 15 or 20 minutes to solve the problem.”

Park Hyeok-jin, an official at the NEC, appeared on a radio program with Mun yesterday and said, “We apologize for the two-and-half-hour shut down,” and “It takes time to judge and respond to the situation.”

Rumors are spreading that the page informing voters of the locations of polling stations was the only one attacked on the NEC Web site. And some DP members, including Mun, are arguing that a DDoS attack targets an entire Web site, not a single page.

“We are concerned that we have been given such a short amount of time to investigate the case,” said Hwang Un-ha, an official at the agency. “But it takes quite a lot of time to analyze bank account records and phone call records.”