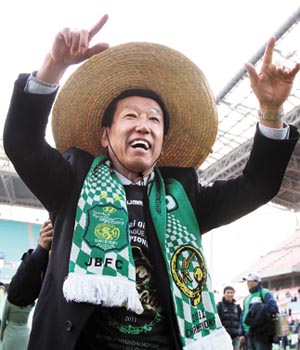 Jeonbuk Hyundai Motors FC coach Choi Kang-hee said that he is confident of getting through the group stage of the Asian Football Confederation Champions League next year despite his club being in the so-called “group of death.”

On Tuesday, the AFC held the group stage draw at its headquarters in Kuala Lumpur for the 2012 AFC Champions League and Jeonbuk, the reigning champion of the Korea Professional Football League (K-League), was placed in Group H. with Kashiwa Reysol of Japan, the winner of the 2011 J-League and Guanzghou Evergrande FC of China, the champion of the 2011 Chinese Super League.

The AFC announced that the champion of the Thai Premier League, which has been yet to be determined, will take the remaining slot in the group, meaning the group will be composed entirely of national league title holders.

In an interview with Ilgan Sports, the JoongAng Ilbo’s daily sports newspaper, Choi, two-time Coach of the Year winner in the K-League, admitted that none of their opponents are “easy” but said he is confident his team can progress to the round of 16.

“Didn’t the AFC purposely group all three champions from East Asia?” Choi joked about the draw result. “But I think it’s better to meet these teams early if we are going to face them anyway in the tournament.”

Kashiwa is the first team in the J-League to win second and first division titles in consecutive seasons. The team beat defending champion Nagoya Grampus to take the domestic title. Ghangzhou, led by Korean coach Lee Jang-soo, lost only twice in their league (20 wins, eight draws and two losses) and has a strong squad.

But Choi, 52, said his team’s experience will make the difference against these clubs. Jeonbuk, the 2006 AFC Champions League winner, has so far featured five times in the competition, while both champions from Japan and China are making their debuts.

Jeonbuk, who netted 33 goals in 12 matches in the 2011 AFC Champions League, the most from any club, fell to Qatar’s Al Saad in a penalty shootout despite playing the final at their home stadium in Jeonju, North Jeolla.

“For next year, we have a strong desire to resolve our disappointment of this year’s runner-up finish,” said Choi who has been in charge of Jeonbuk since 2005. “We want to show the power of the K-League champion.”

Meanwhile, for other K-League clubs who qualified for the AFC Champions League, Ulsan Hyundai FC, runner-up in the K-League, is in Group F along with the Brisbane Roar of Australia, Beijing Guoan of China and the winner of Japan’s Emperor’s Cup. Seongnam Ilhwa Chunma FC, the Korean FA Cup champion, will face Japan’s Nagoya Grampus, China’s Tianjin Teda and Australia’s Central Coast Mariners in Group G.

The slot for Pohang Steelers FC, which finished third in the K-League, is yet to be determined as they must win the playoff in February next year to join Group E where Gamba Osaka of Japan and FC Bunyodkor of Uzbekistan, plus another playoff team are placed.

The AFC Champions League group stage kicks off on March 6 and will take the home-and-away format until May 16. There are eight groups of four clubs total and the top two teams from each group will make up the round of 16.