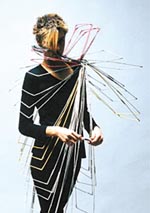 To Dec. 25: This rare exhibition of jewelry design could help redefine the art by demonstrating that jewelry is not always made of gold, silver or precious stones, but can be a form of portable art and a means of communication that goes beyond decoration.

The exhibition features more than 300 pieces of jewelry by 64 artists from 18 countries. Most of the pieces on display shatter our notions about the materials used to make jewelry or the body parts around which it can be worn.

One definitive example is the “Wearable Object” by Dutch artist Lam de Wolf. The work covers the body of the wearer from the neck to below the knees and consists of a group of square wooden frames covered with textiles of various colors. 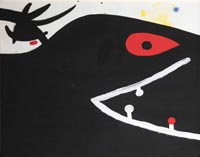 To Dec. 31: The Paris-based Opera Gallery showcases 40 works by a galaxy of modern art masters including the French Impressionist Claude Monet, the Spanish Cubist Pablo Picasso and U.S. pop artist Andy Warhol, to celebrate the 4th anniversary of the launch of its satellite gallery in Seoul.

To Jan. 29: This exhibition features about 110 paintings by hwawon, or court painters, who were responsible for producing paintings for the state as employees of Dohwaseo, the state bureau of painting in the Joseon Dynasty (1392-1910). According to Leeum, it is the first exhibition dedicated to the hwawon, who had a low social status despite their roles in the court.

The first section features paintings that hwawon created for the court and royal household. The highlight of the section is “Royal Palanquin Procession,” a nearly 10-meter-long painting depicting a procession of King Gojong and his family in the late 19th century.

The second section features paintings created by hwawon for private patrons, including noblemen and wealthy aristocrats. The section includes paintings of Taoist immortals by Kim Hong-do (1745-after 1806), regarded as one of the greatest masters in Korean art.

To Feb. 19: This show arrives in Korea after having opened in a Sydney suburb this summer.

According to the museums, the show was inspired by Korean-born video art pioneer Paik Nam-june’s 1976 visit to Sydney and the 1976 Sydney Biennale, in which some Korean artists, including minimalist Lee Ufan, participated.