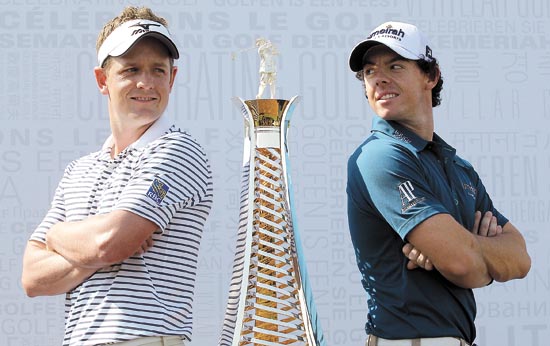 Rory McIlroy of Northern Ireland (R) and Luke Donald of England pose with the trophy ahead of the European Tour’s Dubai World Golf Championship at the Jumeirah Golf Estates in the Gulf emirate on Tuesday. [AFP/YONHAP]


DUBAI - World No. 2 Rory McIlroy says Luke Donald’s deserved current status as the world’s number one golfer won’t stop him from pushing the Englishman to the brink in the European Tour’s Race to Dubai.

Donald has been a picture of consistency this year, having finished outside the top-10 only three times on the European Tour in 2011, and is on the verge of winning the Order of Merit on both sides of the Atlantic.

Having secured the PGA Tour bragging rights, all he needs to do this week at the $7.5 million Dubai World Championship is finish inside the top-10 to clinch the European honor.

The equation is far simpler for McIlroy - the only way he can stop Donald becoming Europe’s No1 in Europe is by winning the tournament, which starts at the Earth course of Jumeirah Golf Estates from today.

As if Donald’s form was not enough of a challenge, the 22-year-old northern Irishman is fighting severe exhaustion after a whirlwind schedule that saw him play 12 straight weeks, and a mystery illness that caused his white blood cell count to drop.

McIlroy said: “For me, over the last 18 months Luke Donald has just been so consistent. He’s won five times in the last 18 months, and all big events, World Match Play, Wentworth, Scottish Open and obviously the Disney when he needed to.

“He’s deservedly the No. 1 ranked player in the world at the minute. But I feel as if I’m playing well. I would love to try my best to overtake him.

“To be honest, I don’t really know what it’s going to take to beat him this week. Energy-wise, I am not where I want to be, but I took a day off yesterday and I am playing the Pro-Am today and I’ll probably take another day off tomorrow. Really try and conserve my energy and focus that all into the four tournament days.

McIlroy is hoping his fantastic win in Hong Kong last week, and his familiarity with Dubai and the Earth course will give him the necessary boost.

McIlroy, who finished third and fifth in his last two appearances at the Dubai World Championship, added: “It would be a great achievement if I do win the Race to Dubai.

“It would perhaps be my second best achievement after winning my first major and it would be a great way to finish what has been my most successful year. It would set me up nicely for 2012.

“Winning the week before always does a lot to your confidence and there was a lot riding in that tournament for me.”