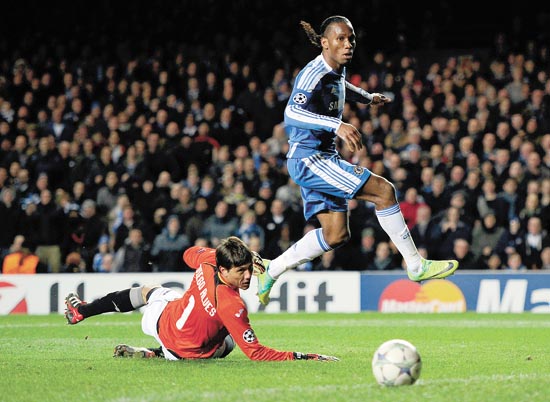 Chelsea’s Didier Drogba, right, slides the ball under Valencia’s goalkeeper Diego Alves to score his second goal of the game during their Champions League group E football match between Chelsea and Valencia at Stamford Bridge in London on Tuesday. [AP/YONHAP]


LONDON - Inspired by Didier Drogba’s double, Chelsea rediscovered its attacking flair to sweep aside Valencia 3-0 and reach the Champions League knockout round on Tuesday.

Woeful away form had left a place among Europe’s elite in jeopardy, but the London club exploited Valencia’s defensive shortcomings to progress as the Group E winner.

Drogba netted after just three minutes, set up Ramires’ 22nd-minute goal and rounded off the ruthless victory in the second half.

It should ease the pressure on Andre Villas-Boas, who turned on the media after the match, complaining about the “persecution’’ of Chelsea during his first season in charge.

“We finished top of the group against all odds,’’ Villas-Boas said. “There has been a lot of criticism of our players and they gave everyone a slap in the face.’’

Bayer Leverkusen clinched second place in Group E with a 1-1 draw at Genk.

The drama of the night came at Borussia Dortmund, with Marseille scoring twice in the closing minutes to win 3-2 and advance as Group F runner-up. Olympiakos was denied second place despite beating group winner Arsenal 3-1.

Zenit St. Petersburg reached the last 16 with Group G winner APOEL at the expense of FC Porto after drawing 0-0 in Portugal.

Chelsea, though, can relax - for now - and focus on catching the two Manchester clubs in the English Premier League.

For the ninth successive season, the Blues are in the knockout phase of the competition owner Roman Abramovich desperately wants to win.

Any nerves the Russian oligarch had about his team’s prospects were eased inside three minutes at Stamford Bridge with a goal - Chelsea’s fastest in the competition - that set the tone for a night of dominance.

Daniel Sturridge, who has displaced record-signing Fernando Torres from the side, switched the ball from the right to left flank. Former Valencia winger Juan Mata then squared to Drogba, who turned Antonio Barragan and fired beyond goalkeeper Diego Alves.

Then Drogba picked up possession inside his own half and charged forward before sending the ball through to Ramires, who swept past Victor Ruiz before striking home.

Drogba’s 36th Champions League goal came in the 76th, racing onto Mata’s through-ball and slotting a low finish into the corner.

“I’m improving since the last few games,’’ Drogba said. “I’ve managed to have more time on the pitch and it’s helping me a lot.’’

Bayer Leverkusen dropped to second in the group, requiring Eren Derdiyok’s late equalizer to cancel out Jelle Vossen’s 30th-minute volley for Genk, which had already been eliminated.

In Dortmund, Marseille looked consigned to a spot in the Europa League in February before staging the late and unlikely comeback.

Dortmund was 2-0 up inside 32 minutes after goals from Jakub Blaszczykowski and Mats Hummels, but Loic Remy headed one back for Marseille just before halftime.

It wasn’t until the 85th that Andre Ayew equalized and substitute Mathieu Valbuena then grabbed a winner two minutes later.