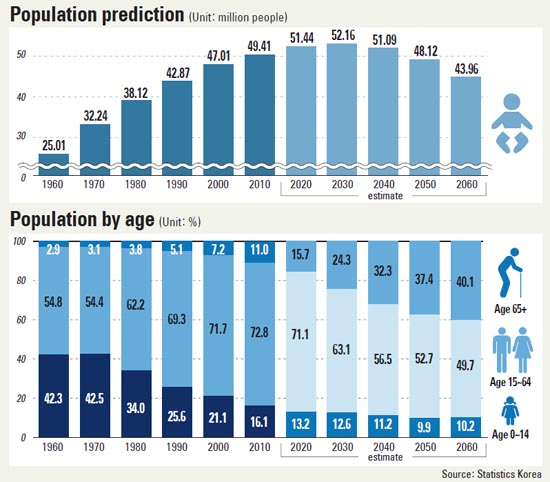 Korea has earned more time to cope with its declining population, one of the chief challenges to keeping the economy growing.

Concerns about an aging society, however, still remain.

According to a report released by Statistics Korea yesterday, the country’s population is expected to steadily rise until 2030 and reach its peak, before falling gradually from the following year.

The latest forecast is less gloomy than a previous report released in 2005. At that time, the government expected the country’s population to peak in 2018 at 49.34 million, before starting a steady decline.

Over the past five years, the overall birthrate has risen. The country’s life expectancy has also been extended compared to 2005 and the number of foreign residents residing in the country for more than three months has increased.

In 2005, the country’s birthrate hit a record low of 1.08. That rate, however, increased to 1.23 last year. Although Korea’s birthrate remains relatively low compared to other countries, the increase is “significant,” according to the agency.

“In the early 2000s, many women in their 20s were reluctant to give birth because of the gloomy economy following the Asian financial crisis in late 1990s,” said Seo Woon-joo, head of Statistics Korea’s demography department. “The government’s policies to improve the country’s low birthrate has also been attributed to the increase.”

Life expectancy has also been extended, which slowed down the pace of population decline. The agency’s earlier forecast for 2010 stated that the average life expectancy for men in 2050 would be 82.87 years. However, the forecast announced yesterday was 85.09 years.

“Korea’s population increased by around 500,000 last year compared to the number that was projected five years ago,” said Lee Ji-yeon, an official from the agency. “The overall population decline is showing signs of slowing down.”

“The population decline predicted in 2005 was excessively steep, so compared to then, the country’s current demography could be seen as a great improvement,” said Jeon Gwang-hee, sociology professor at Chungnam National University.