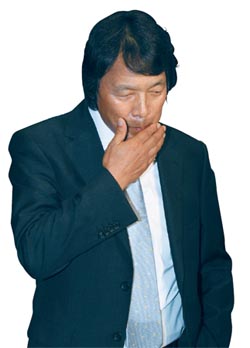 The Korea Football Association sacked national team coach Cho Kwang-rae yesterday in what he called a “nonsense” decision swayed by “outside influences” after 15 months at the helm. The coach’s career ends with 11 wins, five draws and three losses.

Hwangbo Kwan, head of the technical committee in charge of managing coaching staff, said the KFA began discussions about Cho’s future after a 2-1 loss to 146th-ranked Lebanon in a Nov. 15 qualifier for the 2014 FIFA World Cup.

“Last Monday, I met with senior KFA executives and we concluded that we couldn’t reach the World Cup the way the team was playing,” Hwangbo said. “I sat down with Cho last night [Wednesday] and told him he should leave.”

The away loss to Lebanon put the Taeguk Warriors’ World Cup hopes in jeopardy. Despite sitting atop Group B, the team could face elimination before reaching the final round of the Asian qualifiers if defeated by Kuwait on Feb. 29 at home and Lebanon manage to get a point in their remaining game away in the UAE.

“It was a big decision for us in order to develop the future of Korean football,” Hwangbo said. “We need to qualify for the World Cup.”

Cho said he accepts the KFA’s decision, but is furious about the way in which the move was handled. According to Cho, 52, the KFA didn’t take proper steps in the firing.

Hwangbo Kwan, head of the technical committee for the Korea Football Association, speaks during the press conference held at the KFA headquarters in Seoul, yesterday. [YONHAP]

Cho argues that the KFA’s technical committee, which has the right to hire or fire national team coaches, never held an official meeting to discuss his future. The decision was instead driven by senior KFA executives outside of the committee.

“The national team is not an amateur football club,” Cho said to Ilgan Sports, the JoongAng Ilbo’s daily sports newspaper, yesterday. “How can senior officials have secret meetings and fire me - it’s nonsense.”

Cho continued to say that the “old” administration of the association should be corrected.

“This isn’t just about me,” he said. “No matter who becomes the national team coach or who gets fired, these moves should go through proper steps and procedures for the sake of Korean football. National team coaches shouldn’t be fired because of outside influences.”

Cho has had an uneasy relationship with KFA officials in the past. In May, Cho had a dispute with former technical committee chairman Lee Hoi-taek for selecting national team players and was also reportedly conflicting with the KFA’s public relations department regarding interviews.

Hwangbo admitted that the procedure was not smooth, but defended the necessity of deviating from traditional steps since the technical committee had not yet been officially formed.

The committee head, who took the job in early November, added that the potential members of the technical committee did have one unofficial meeting to discuss Cho’s status, but the decision was in fact finally made by a meeting of top executives.

“I regret that there are now questions about that procedure,” Hwangbo said. “We tried our best to take formal steps, but I also felt that we needed to act quickly to stabilize the situation and take the next step.”

Hwangbo added that the KFA was about to have a technical committee meeting, but since media reports were already out on Wednesday night, it decided to hold a press conference immediately.

Whether the KFA abided by proper firing procedures was not the only controversial issue addressed at yesterday’s press conference. Hwangbo revealed that the decision to release Cho took into account potential effects on the national team’s sponsors and broadcasters, which would be hit hard if the squad failed to qualify for the World Cup.

“Sponsors and broadcasters are also important,” Hwangbo said. “It is true that we had talks considering them, but on the other hand, the team needed a change quickly.”

Handing over the reins

As for the Cho’s successor, Hwangbo said the KFA is thinking about hiring an experienced coach who can cope with the current situation.

“We are starting with a blank slate,” Hwangbo said. “Anyone who knows Korea and can lead the team well is a candidate.”

Hwangbo said the technical committee will try to sign a new coach no later than the end of this month. He said a technical committee meeting will be held soon to decide the future of Cho’s coaching staff as well, although chief assistant coach Park Tae-ha announced that he will step down despite having seven months left on his contract.

“As a chief assistant, I am also responsible for letting the situation get to this point,” Park said yesterday after the KFA decision was announced. “I will leave the team with coach Cho.”

Cho took over the team in July 2010, succeeding Huh Jung-moo, who guided the country to the round of 16 at the 2010 World Cup in South Africa. The new coach said he would play attacking football with quick short passes like world No. 1 Spain.

Aside from the recent loss to Lebanon and a friendly defeat by Japan, Cho has been criticized for relying heavily on overseas players and switching players’ original positions too often.

Since Park Ji-sung and Lee Young-pyo retired from the national team after playing in the Asian Cup in January, Cho has been trying to find replacements by testing young players, which later caused a player selection dispute with the Under-23 national team coach Hong.