Musicals mine new models for success

Musicals mine new models for success 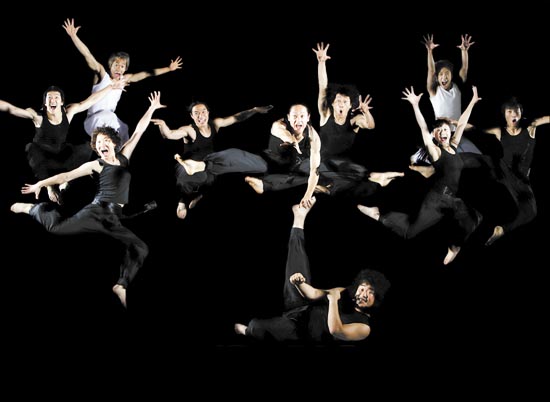 Performers from “Jump,” a nonverbal martial arts show inspired by taekwondo, present a scene from the show. [JoongAng Ilbo]


Nonverbal Korean performances have been capturing the attention of global audiences for years with striking choreography, colorful costumes and traditional influences. Yet in the face of declining interest in these productions at home and abroad in recent years, musical theater producers have turned to new marketing and production techniques to revitalize existing productions, while also looking for new production models, including the engagement of foreign “show doctors” brought in to rework the shows and keep them up to date.

The country’s musical theater industry experienced a revolution with the production of “Nanta” (“Cookin’?”), which combines the battering rhythms of cooking with visual and olfactory elements to arouse the senses. The show premiered in October 1997 and garnered international attention after its global premiere at the Edinburgh Festival Fringe in 1999, where it garnered the award for best performance.

Since then, it has been presented in 41 different countries, including the United States, Russia, Italy and Australia, and has become Korea’s longest-running show. It enjoyed the honor of being the first Asian show to have its own Off Broadway production after it premiered on Broadway in 2003. The show ran for 18 months Off Broadway beginning in 2004 and continues to be produced at three theaters in Seoul and one on Jeju Island. As a testament to its continuing success, it opened its second “Nanta” theater abroad in Bangkok in September.

In Korea, the show set off a storm of nonverbal productions, including “Jump,” “The Ballerina Who Loves a B-Boy,” “Drum Cat Concert,” “Fanta-stick,” “Sa.choom” and “Bibap,” many of which have followed in the footsteps of “Nanta” by producing global premieres in Edinburgh.

“‘Nanta’ continues to thrive, and we hope to do the same,” said Kim Sung-ryang, public relations team manager for “Jump,” a comic nonverbal martial arts show inspired by taekwondo. It was brought to Edinburgh in 2006 and topped ticket sales.

“After our success at the festival, we saw a great increase in international invitations,” said Lee Jun-sang, director of “Jump.”

Yet flagging interest in nonverbal productions in recent years has forced musical theater producers to re-evaluate their approach to production and marketing, not only to capture the attention of foreign audiences, who are increasingly visiting Korea as a result of the popularity of Hallyu, or Korean Wave, but to draw domestic audiences as well.

Attendance at “Nanta” by foreign audiences peaked in 2007, when its cumulative attendance figure surpassed the one-million mark, and has declined since then. The number of foreigners who saw the show last year was 630,000, according to its producer, PMC Production.

Korean audiences made up only about 22 percent of attendance at “Nanta” last year, data from PMC shows. The majority of the seats in the four “Nanta” theaters in Korea are occupied by visiting foreigners, especially those from Japan (31 percent) or other parts of Asia (42 percent), the data show.

Faced with the fact that most theatergoers will see the show only once, PMC said it developed a new marketing strategy that involved packaging tickets with tours in order to ensure that attendance would remain steady.

“We now have about 750 travel agencies we are working with,” said Shin Ji-yeon of PMC Production’s public relations team. “This helps ensure that the show will continue, but it’s not the only reason.” 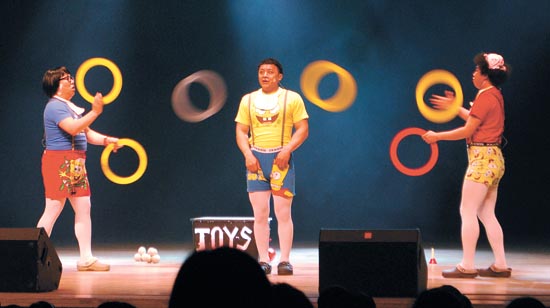 “Babbling Comedy” is performed at Woosong Arts Center in Daejeon in April. Provided by Happy World


The other reason has to do with the introduction of show doctors, foreign theater producers or directors who are brought in to retouch a musical and specifically increase its appeal to foreign audiences.

“Nanta” has worked with three show doctors so far, and “Bibap,” a nonverbal performance inspired by bibimbap (vegetables and beef mixed wtih rice) has had one show doctor at its disposal.

“Bibap” started its permanent run in Korea in May after winning acclaim at the Edinburgh Fringe last year. It was refined by a show doctor in July.

“Show doctors help a show that is looking to increase its global appeal and eliminate elements that will be incomprehensible to foreigners,” said Kim Bu-kyung of CJ Entertainment, which produces the show.

Actors in the nonverbal performance “Bibap” demonstrate how to make bibimbap (vegetables and beef mixed with rice), in a show at Kepco Art Center in Seocho-dong, southern Seoul, last month. [JoongAng Ilbo]

Since the rise of nonverbal musicals 10 years ago, the formula for the success of new productions has so far been similar to the path that shows like “Nanta” and “Bibap” have tread: create a nonverbal show with Korean cultural elements and then bring it to international festivals to gain global momentum and boost ticket sales at home.

But the question is whether the formula can continue to work and whether productions can include Korean-language dialogue and still be popular.

“A nonverbal performance is relatively more popular than anything else for drawing foreign audiences because it is the quickest way to overcome the language barrier, but that doesn’t mean that the key to success is to go nonverbal,” said Jeon Hye-jeong of Korean Cultural Centre U.K., which brings Korean productions to the U.K.

One production that tested this theory is “Babbling Comedy,” by the standup group of the same name (in Korean, it’s known as Ong-als, which means “babbling”). The production won critical acclaim at the Edinburgh festival and Thames Festival in the U.K. this year. It is slated to appear at the Festival d’Avignon in France in July and on the “Britain’s Got Talent” television show next year.

“Before the group appeared, it was all nonverbal performances, but now we’ve learned that this kind of comedy can work,” Jeon said.

Jeon said that Oh Tae-seok of Mokwha Repertory Company, which appeared at the Edinburgh festival in the summer, was told by the festival director to keep the dialogue in his theater pieces, even if the production is presented for foreign audiences.

“He said that although audiences might not understand it intellectually, they will understand it intuitively,” Jeon said. “Speed, tone of voice and verbal emphasis can all be used to enhance the dramatic effect of the dialogue so that people can understand.”


Yet PMC Production, which has 38 musicals in its roster, including some versions of “Nanta,” said it is planning to adhere to the nonverbal model, at least for now. It is currently moving forward with auditions for a new production called “Music Show: The Wedding.”

“We’ve actually produced many nonverbal shows, but nothing has been as big a hit as ‘Nanta,’?” said PMC’s Shin. “We hope this show will change the demographics of the nonverbal performance industry.”

There has also been debate about just how many cultural elements musicals should retain, but there is at least one company that believes that culture is what give a production its appeal.

“Of course incorporating Korean culture into a theater work can be appealing to foreign audiences since it’s something different,” said Shin Se-na of Acom Korea, which produces “Hero.” The musical depicts the life of independence activist Ahn Jung-geun and had its New York debut in August.

Jeon of Korean Cultural Center U.K. said she believes that there is also something else at work in Korean productions’ success.

“Foreigners like ‘Nanta’ or ‘Jump,’ not because they’re based on Korean culture, but because of how well the creative team presents the idea,” Jeon said “And we may soon have foreign agencies who want to buy licenses to shows produced by Korean companies.”